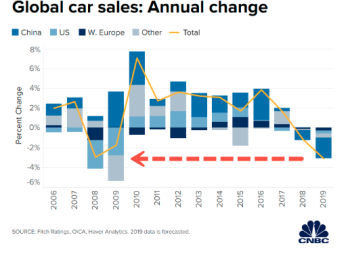 In my opinion, the data itself have already considered the weight of each region, that is, China's 1% growth in 2006 is China contributes 1% of world's total car sales growth, and the actual growth in Chinese market must be higher. Nevertheless, the chart is complex and not intuitive.

I don`t know about this particular charts since it isn’t properly indicated, but from experience, these types of charts normally show "Contributions to percentage change", they do not show growth within a country but each countries contribution to global growth. The 1% attributed to china would be the difference in sales within china divided by global sales.
These charts are widely used in economics reporting to present GDP growth by components (Trade, Business investment, etc...).

Yeah, I mean that the data has already considered what you said, in your example, the growth rate on the chart would be 0.75%, not 3%. I looked up the true car sales growth of China in year 2006, which is 21.8%, that is far more than 1% showed on the chart.

Hugo: Can you link to one of those charts about GDP growth? That could help.

I'm still perplexed, not quite understanding what that means. If one uses the total market growth (say, 10 million units) as the base for all growth rates, rather than sector growth, then each sector's value will be a proportion of the 10 million, and the percentages should add up to 100%.