Junk Charts
Welcome Twitter About Book Blog RSS
Graph literacy, in a sense
This chart tells you how rich is rich - if you can read it

How to read this cost-benefit chart, and why it is so confusing

Long-time reader Antonio R. found today's chart hard to follow, and he isn't alone. It took two of us multiple emails and some Web searching before we think we "got it". 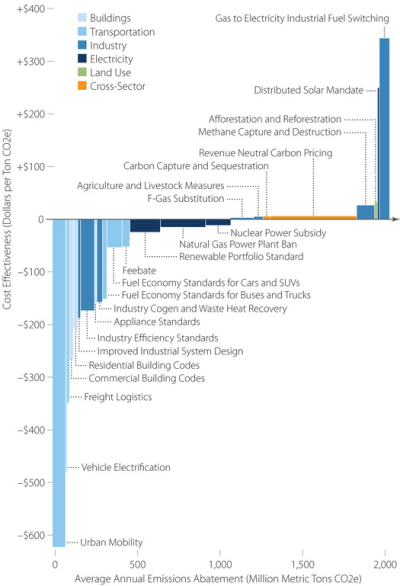 Antonio first encountered the chart in a book review (link) of Hal Harvey et. al, Designing Climate Solutions. It addresses the general topic of costs and benefits of various programs to abate CO2 emissions. The reviewer praised the "wealth of graphics [in the book] which present complex information in visually effective formats." He presented the above chart as evidence, and described its function as:

(This description is much more informative than the original chart title, which states "The policy cost curve shows the cost-effectiveness and emission reduction potential of different policies.")

Spend a little time with the chart now before you read the discussion below.

Warning: this is a long read but well worth it.

If your experience is anything like ours, scraps of information flew at you from different parts of the chart, and you had a hard time piecing together a story.

What are the reasons why this data graphic is so confusing?

Everyone recognizes that this is a column chart. For a column chart, we interpret the heights of the columns so we look first at the vertical axis. The axis title informs us that the height represents "cost effectiveness" measured in dollars per million metric tons of CO2. In a cost-benefit sense, that appears to mean the cost to society of obtaining the benefit of reducing CO2 by a given amount.

That's how far I went before hitting the first roadblock.

For environmental policies, opponents frequently object to the high price of implementation. For example, we can't have higher fuel efficiency in cars because it would raise the price of gasoline too much. Asking about cost-effectiveness makes sense: a cost-benefit trade-off analysis encapsulates the something-for-something principle. What doesn't follow is that the vertical scale sinks far into the negative. The chart depicts the majority of the emissions abatement programs as having negative cost effectiveness.

What does it mean to be negatively cost-effective? Does it mean society saves money (makes a profit) while also reducing CO2 emissions? Wouldn't those policies - more than half of the programs shown - be slam dunks? Who can object to programs that improve the environment at no cost?

I tabled that thought, and proceeded to the horizontal axis.

In the meantime, my eyes are distracted by the constellation of text labels. The viewing area of this column chart is occupied - at least 50% - by text. These labels tell me that each column represents a program to reduce CO2 emissions.

The dominance of text labels is a feature of this design. For a conventional column chart, the labels are situated below each column. Since the width does not usually carry any data, we tend to keep the columns narrow - Tufte, ever the minimalist, has even advocated reducing columns to vertical lines. That leaves insufficient room for long labels. Have you noticed that government programs hold long titles? It's tough to capture even the outline of a program with fewer than three big words, e.g. "Renewable Portfolio Standard" (what?).

The design solution here is to let the column labels run horizontally. So the graphical element for each program is a vertical column coupled with a horizontal label that invades the territories of the next few programs. Like this:

The horror of this design constraint is fully realized in the following chart, a similar design produced for the state of Oregon (lifted from the Plan Washington webpage listed as a resource below): 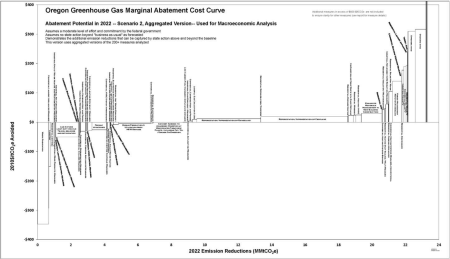 In a re-design, horizontal labeling should be a priority.

Realizing that I've been distracted by the text labels, back to the horizontal axis I went.

This is where I encountered the next roadblock.

The axis title says "Average Annual Emissions Abatement" measured in millions metric tons. The unit matches the second part of the vertical scale, which is comforting. But how does one reconcile the widths of columns with a continuous scale? I was expecting each program to have a projected annual abatement benefit, and those would fall as dots on a line, like this: 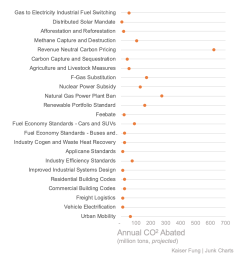 Instead, we have line segments sitting on a line, like this:

Think of these bars as the bottom edges of the columns. These line segments can be better compared to each other if structured as a bar chart: 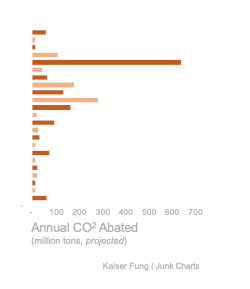 Instead, the design arranges these lines end-to-end.

To unravel this mystery, we go back to the objective of the chart, as announced by the book reviewer. Here it is again:

The primary goal of the chart is a decision-making tool for policy-makers who are evaluating programs. Each program has a cost and also a benefit. The cost is shown on the vertical axis and the benefit is shown on the horizontal. The decision-maker will select some subset of these programs based on the cost-benefit analysis. That subset of programs will have a projected total expected benefit (CO2 abatement) and a projected total cost.

Look at that axis again. Imagine you are required to learn the specific benefit of program titled "Fuel Economy Standards: Cars & SUVs". 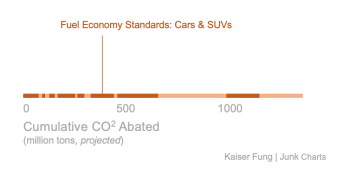 This is impossible to do without pulling out a ruler and a calculator. What the axis labels do tell us is that if all the programs to the left of Fuel Economy Standards: Cars & SUVs were adopted, the cumulative benefits would be 285 million metric tons of CO2 per year. And if Fuel Economy Standards: Cars & SUVs were also implemented, the cumulative benefits would rise to 375 million metric tons.

At long last, we have arrived at a reasonable interpretation of the cost-benefit chart.

Policy-makers are considering throwing their support behind specific programs aimed at abating CO2 emissions. Different organizations have come up with different ways to achieve this goal. This goal may even have specific benchmarks; the government may have committed to an international agreement, for example, to reduce emissions by some set amount by 2030. Each candidate abatement program is evaluated on both cost and benefit dimensions. Benefit is given by the amount of CO2 abated. Cost is measured as a "marginal cost," the amount of dollars required to achieve each million metric ton of abatement.

There are still more limitations of the chart design.

In a Trifecta Checkup (guide), I rate this chart Type V. The chart has a great purpose, and the design reveals a keen sense of the decision-making process. It's not a data dump for sure. In addition, an impressive amount of data gathering and analysis - and synthesis - went into preparing the two data series required to construct the chart. (Sure, for something so subjective and speculative, the analysis methodology will inevitably be challenged by wonks.) Those two data series are reasonable measures for the stated purpose of the chart.

The chart form, though, has various shortcomings, as shown here.

In our email exchange, Antonio and I found the Plan Washington website useful. This is where we learned that this chart is called the marginal abatement cost curve.

Also, the consulting firm McKinsey is responsible for popularizing this chart form. They have published this long report that explains even more of the analysis behind constructing this chart, for those who want further details.

I use (and make) charts like this all the time for the same purpose as your example. Do you have recommendations for how to keep all the information in a single chart and improve it?

AC: Can you take the featured chart and list out the key things you'd like readers to be able to do, in order of importance? I will post some ideas based on your list