Who is a millennial? An example of handling uncertainty

I found this fascinating chart from CNBC, which attempts to nail down the definition of a millennial. 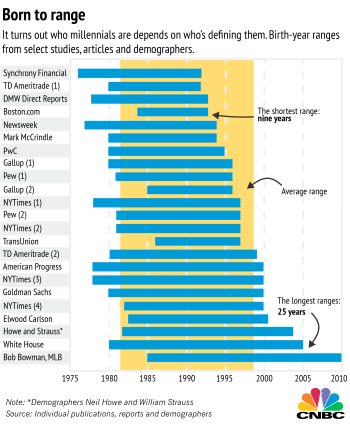 I appreciate this effort a lot. The design is thoughtful. In making this chart, the designer added the following guides:

The underlying issue is how to display uncertainty. The interest here is not just to feature the "average" definition of a millennial but to show the range of definitions. 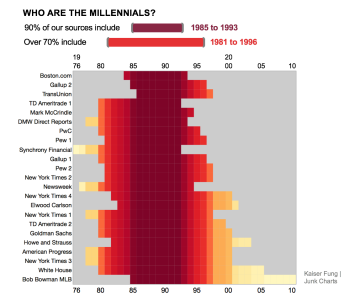 Can you post a link to the accompanying CNBC story?

DS, MSZ: Thanks for the heads up. Fixed the text.

DS: I saved the chart some time ago. I think the article may have been this one.

I really like this chart revision. The original is pretty good but the revision is just super-easy and intuitive to read.

Awesome chart. Using a square for every year is better than just a bar and coloring them by uncertainty makes the overall conclusion a lot clearer in my opinion.