Tennis greats at the top of their game

The following chart of world No. 1 tennis players looks pretty but the payoff of spending time to understand it isn't high enough. The light colors against the tennis net backdrop don't work as intended. The annotation is well done, and it's always neat to tug a legend inside the text.

The original is found at Tableau Public (link).

The topic of the analysis appears to be the ages at which tennis players attained world #1 ranking. Here are the male players visualized differently: 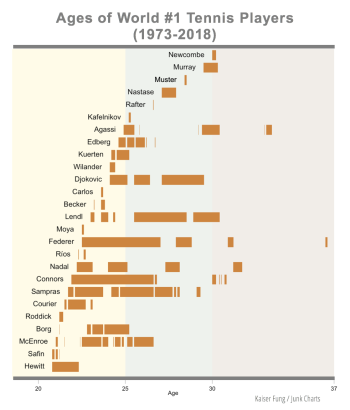 Some players like Jimmy Connors and Federer have second springs after dominating the game in their late twenties. It's relatively rare for players to get to #1 after 30.

An interesting alternative might be to show them with time on the x axis and use colour to show age.