As Dorian confounds meteorologists, we keep our minds clear on hurricane graphics, and discover correlation as our friend

As Hurricane Dorian threatens the southeastern coast of the U.S., forecasters are fretting about the lack of consensus among various predictive models used to predict the storm’s trajectory. The uncertainty of these models, as reflected in graphical displays, has been a controversial issue in the visualization community for some time.

Let’s start by reviewing a visual design that has captured meteorologists in recent years, something known as the cone map. 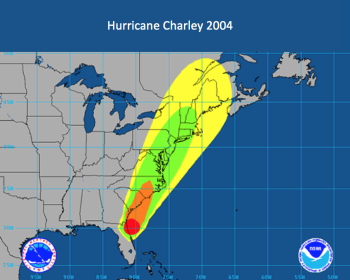 If asked to explain this map, most of us trace a line through the middle of the cone understood to be the center of the storm, the “cone” as the areas near the storm center that are affected, and the warmer colors (red, orange) as indicating higher levels of impact. [Note: We will  design for this type of map circa 2000s.]

The above interpretation is complete, and feasible. Nevertheless, the data used to make the map are forward-looking, not historical. It is still possible to stick to the same interpretation by substituting historical measurement of impact with its projection. As such, the “warmer” regions are projected to suffer worse damage from the storm than the “cooler” regions (yellow).

After I replace the text that was removed from the map (see below), you may notice the color legend, which discloses that the colors on the map encode probabilities, not storm intensity. The text further explains that the chart shows the most probable path of the center of the storm – while the coloring shows the probability that the storm center will reach specific areas.

When reading a data graphic, we rarely first look for text about how to read the chart. In the case of the cone map, those who didn’t seek out the instructions may form one of these misunderstandings:

Adding to the confusion, other designers have produced cone maps in which color is encoding projections of wind speeds. Here is the one for Dorian. 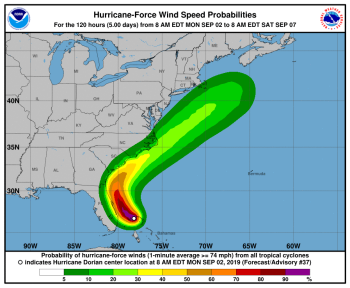 This map displays essentially what we thought the first cone map was showing.

One way to differentiate the two maps is to roll time forward, and imagine what the maps should look like after the storm has passed through. In the wind-speed map (shown below right), we will see a cone of damage, with warmer colors indicating regions that experienced stronger winds. 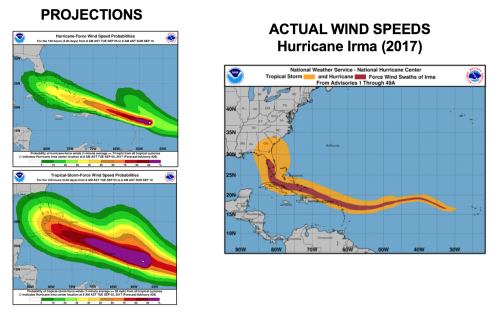 In the storm-center map (below right), we should see a single curve, showing the exact trajectory of the center of the storm. In other words, the cone of uncertainty dissipates over time, just like the storm itself.

After scientists learned that readers were misinterpreting the cone maps, they started to issue warnings, and also re-designed the cone map. The cone map now comes with a black-box health warning right up top. Also, in the storm-center cone map, color is no longer used. The National Hurricane Center even made a youtube pointing out the dos and donts of using the cone map. 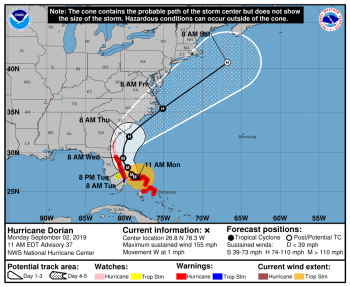 The conclusion drawn from misreading the cone map isn’t as devastating as it’s made out to be. This is because the two issues are correlated. Since wind speeds are likely to be stronger nearer to the center of the storm, if one lives in a region that has a low chance of being a direct hit, then that region is also likely to experience lower average wind speeds than those nearer to the projected center of the storm’s path.

Alberto Cairo has written often about these maps, and in his upcoming book, How Charts Lie, there is a nice section addressing his work with colleagues at the University of Miami on improving public understanding of these hurricane graphics. I highly recommended Cairo’s book here.