What is a bad chart?

In the recent issue of Madolyn Smith’s Conversations with Data newsletter hosted by DataJournalism.com, she discusses “bad charts,” featuring submissions from several dataviz bloggers, including myself.

What is a “bad chart”? Based on this collection of curated "bad charts", it is not easy to nail down “bad-ness”. The common theme is the mismatch between the message intended by the designer and the message received by the reader, a classic error of communication. How such mismatch arises depends on the specific example. I am able to divide the “bad charts” into two groups: charts that are misinterpreted, and charts that are misleading.

Charts that are misinterpreted

The Causes of Death entry, submitted by Alberto Cairo, is a “well-designed” chart that requires “reading the story where it is inserted and the numerous caveats.” So readers may misinterpret the chart if they do not also partake the story at Our World in Data which runs over 1,500 words not including the appendix. 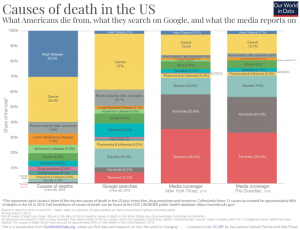 The map of Canada, submitted by Highsoft, highlights in green the provinces where the majority of residents are members of the First Nations. The “bad” is that readers may incorrectly “infer that a sizable part of the Canadian population is First Nations.” 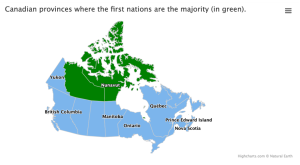 In these two examples, the graphic is considered adequate and yet the reader fails to glean the message intended by the designer.

Charts that are misleading

Two fellow bloggers, Cole Knaflic and Jon Schwabish, offer the advice to start bars at zero (here's my take on this rule). The “bad” is the distortion introduced when encoding the data into the visual elements.

The Color-blindness pictogram, submitted by Severino Ribecca, commits a similar faux pas. To compare the rates among men and women, the pictograms should use the same baseline.

In these examples, readers who correctly read the charts nonetheless leave with the wrong message. (We assume the designer does not intend to distort the data.) The readers misinterpret the data without misinterpreting the graphics. 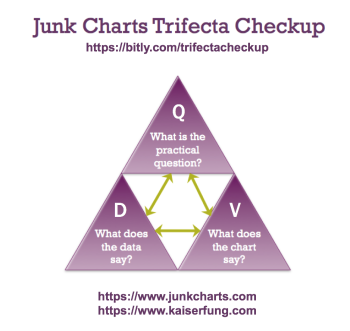 The visual design of the Causes of Death chart is not under question, and the intended message of the author is clearly articulated in the text. Our concern is that the reader must go outside the graphic to learn the full message. This suggests a problem related to the syncing between the visual design and the message (the QV edge).

By contrast, in the Color Blindness graphic, the data are not under question, nor is the use of pictograms. Our concern is how the data got turned into figurines. This suggests a problem related to the syncing between the data and the visual (the DV edge).

When you complain about a misleading chart, or a chart being misinterpreted, what do you really mean? Is it a visual design problem? a data problem? Or is it a syncing problem between two components?

I would like to use the "Trifecta" structure as part of a session on Data Visualization for a seminar internal to our company. How should this material be referenced?

The set of blog posts that refer to the Trifecta Checkup can be accessed here: https://junkcharts.typepad.com/junk_charts/trifecta-checkup