Reader Fernando P. was baffled by this chart from the Perception Gap report by More in Common. (link to report) 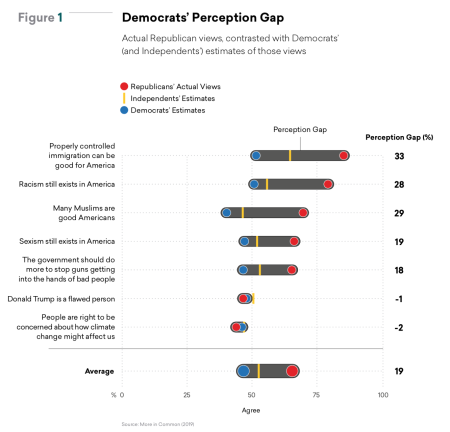 Overall, this chart is quite good. Its flaws are subtle. There is so much going on, perhaps even the designer found it hard to keep level.

Perhaps as an after-thought, the designer added the yellow stripes, which is a third estimate of Republican views, this time by Independents. This little addition wreaks havoc. There are now three estimates - and two gaps. There is a new gap, between Independents' perception of Republican views, and Republican's self-reported views. This I-gap is hidden in plain sight. The words "perception gap" obstinately sticks to the D-gap.

Here is a slightly modified version of the same chart. 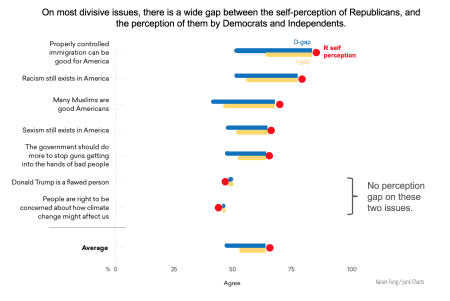 The design focuses attention on the two gaps (bars). It also identifies the Republican self-perception as the anchor point from which the gaps are computed.

I have chosen to describe the Republican dot as "self-perception" rather than "actual view," which connotes a form of "truth." Rather than considering the gap as an error of estimation, I like to think of the gap as the difference between two groups of people asked to estimate a common quantity.

Also, one should note that on the last two issues, there is virtual agreement.

Aside from the visual, I have doubts about the value of such a study. Only the most divisive issues are being addressed here. Adding a few bipartisan issues would provide controls that can be useful to tease out what is the baseline perception gap.

I wonder whether there is a self-selection in survey response, such that people with extreme views (from each party) will be under-represented. Further, do we believe that all survey respondents will provide truthful answers to sensitive questions that deal with racism, sexism, etc.? For example, if I am a moderate holding racist views, would I really admit to racism in a survey?