In the past month, there have been several large-scale protests in Hong Kong. The largest one featured up to two million residents taking to the streets on June 16 to oppose an extradition act that was working its way through the legislature. If the count was accurate, about 25 percent of the city’s population joined in the protest. Another large demonstration occurred on July 1, the anniversary of Hong Kong’s return to Chinese rule.

South China Morning Post, which can be considered the New York Times of Hong Kong, is well known for its award-winning infographics, and they rose to the occasion with this effort.

This is one of the rare infographics that you’d not regret spending time reading. After reading it, you have learned a few new things about protesting in Hong Kong.

In particular, you’ll learn that the recent demonstrations are part of a larger pattern in which Hong Kong residents express their dissatisfaction with the city’s governing class, frequently accused of acting as puppets of the Chinese state. Under the “one country, two systems” arrangement, the city’s officials occupy an unenviable position of mediating the various contradictions of the two systems.

This bar chart shows the growth in the protest movement. The recent massive protests didn't come out of nowhere. 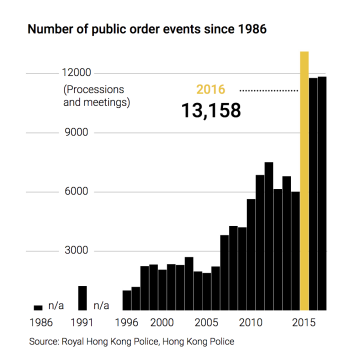 This line chart offers a possible explanation for burgeoning protests. Residents’ perceived their freedoms eroding in the last decade. If you have seen videos of the protests, you’ll have noticed the peculiar protest costumes. Umbrellas are used to block pepper sprays, for example. The following lovely graphic shows how the costumes have evolved:

The scale of these protests captures the imagination. The last part in the infographic places the number of protestors in context, by expressing it in terms of football pitches (as soccer fields are known outside the U.S.) This is a sort of universal measure due to the popularity of football almost everywhere. (Nevertheless, according to Wikipedia, the fields do not have one fixed dimension even though fields used for international matches are standardized to 105 m by 68 m.) 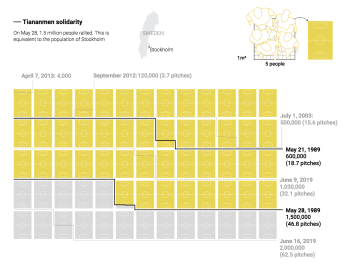 This chart could be presented as a bar chart. It’s just that the data have been re-scaled – from counting individuals to counting football pitches-ful of individuals.

***
Here is the entire infographics.