Reader Steve M. noticed an oversight in the Guardian in the following bar chart (link): 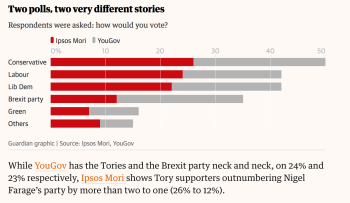 The reporter was discussing an important story that speaks to the need for careful polling design. He was comparing two polls, one by Ipsos Mori, and one by YouGov, that estimates the vote support for each party in the future U.K. general election. The bottom line is that the YouGov poll predicts about double the support for the Brexit Party than the Ipsos-Mori poll.

The stacked bar chart should only be used for data that can be added up. Here, we should be comparing the numbers side by side: 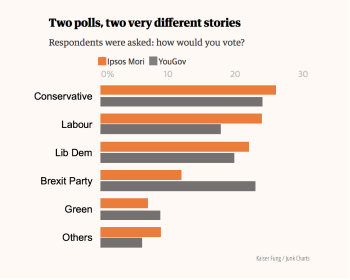 I've always found this standard display inadequate. The story here is the gap in the two bar lengths for the Brexit Party. A secondary story is that the support for the Brexit Party might come from voters breaking from Labour. In other words, we really want the reader to see: 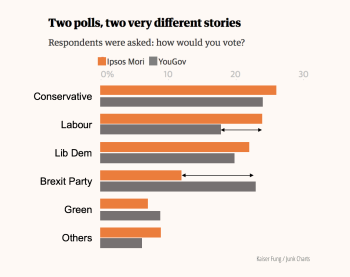 Switching to a dot plot helps bring attention to the gaps: 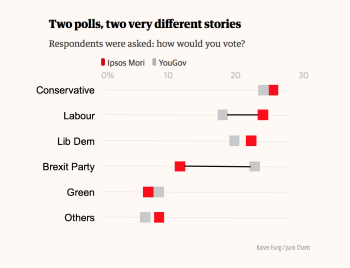 Now, putting the house in order: 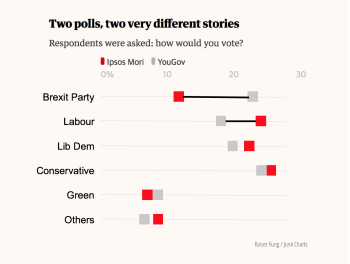 Why do these two polls show such different results? As the reporter explained, the answer is in how the question was asked. The Ipsos-Mori is unprompted, meaning the Brexit Party was not announced to the respondent as one of the choices while the YouGov is prompted.

This last version imposes a direction on the gaps to bring out the secondary message - that the support for Brexit might be coming from voters breaking from Labour. 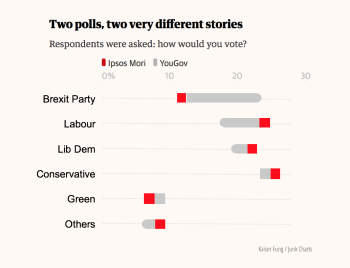 The concern I have with your last chart is that the rounded gray bar with the red marker at the end suggests motion from the start of the gray bar to the red marker. On first glance it appears that Brexit Party support is decreasing and labor is increasing rather than differences between two values.

Jeff: No doubt, the "arrow" can be misinterpreted as time movement. Another critique is that there are two possible symmetric versions because either poll can be used as the anchor point. Adding annotation of "prompted" and "unprompted" may help mitigate both these concerns. But I think any graphic that does not convey the shift from X to Y is deficient. Someone else might come up with something better.