Wayward legend takes sides in a chart of two sides, plus data woes 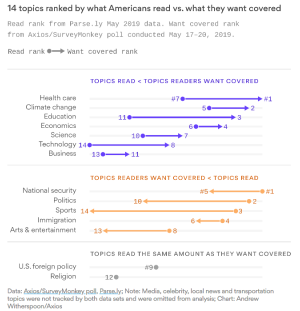 From a Trifecta Checkup perspective, the chart has a clear question: are consumers getting what they wanted to read in the news they are reading?

Nevertheless, the chart is a visual mess, and the underlying data analytics fail to convince. So, it’s a Type DV chart. (See this overview of the Trifecta Checkup for the taxonomy.)

The designer did something tricky with the axis but the trick went off the rails. The underlying data consist of two set of ranks, one for news people consumed and the other for news people wanted covered. With 14 topics included in the study, the two data series contain the same values, 1 to 14. The trick is to collapse both axes onto one. The trouble is that the same value occurs twice, and the reader must differentiate the plot symbols (triangle or circle) to figure out which is which.

It does not help that the lines look like arrows suggesting movement. Without first reading the text, readers may assume that topics change in rank between two periods of time. Some topics moved right, increasing in importance while others shifted left.

The design wisely separated the 14 topics into three logical groups. The blue group comprises news topics for which “want covered” ranking exceeds the “read” ranking. The orange group has the opposite disposition such that the data for “read” sit to the right side of the data for “want covered”. Unfortunately, the legend up top does more harm than good: it literally takes sides!

Here, I've put the data onto a scatter plot: 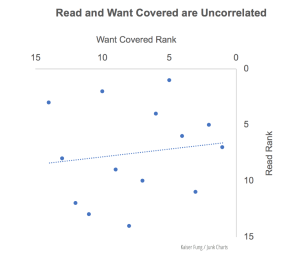 The two sets of ranks are basically uncorrelated, as the regression line is almost flat, with “R-squared” of 0.02.

The analyst tried to "rescue" the data in the following way. Draw the 45-degree line, and color the points above the diagonal blue, and those below the diagonal orange. Color the points on the line gray. Then, write stories about those three subgroups. 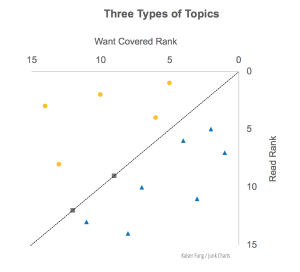 Further, the ranking of what was read came from Parse.ly, which appears to be surveillance data (“traffic analytics”) while the ranking of what people want covered came from an Axios/SurveyMonkey poll. As for as I could tell, there was no attempt to establish that the two populations are compatible and comparable.