Re-thinking a standard business chart of stock purchases and sales

Here is a typical business chart. 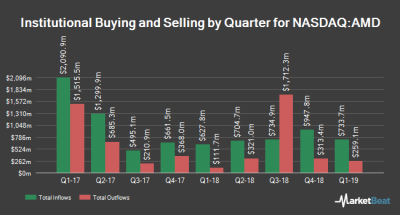 Let's give this chart a three-step treatment.

Remove the data labels, which stand sideways awkwardly, and are redundant given the axis labels. If the audience includes people who want to take the underlying data, then supply a separate data table. It's easier to copy and paste from, and doing so removes clutter from the visual.

The value axis is probably created by an algorithm - hard to imagine someone deliberately placing axis labels  $262 million apart.

The gridlines are optional. 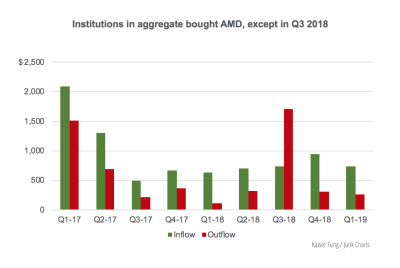 Simplify and re-organize the time axis labels; show the quarter and year structure. The years need not repeat.

Align the vocabulary on the chart. The legend mentions "inflows and outflows" while the chart title uses the words "buying and selling". Inflows is buying; outflows is selling. 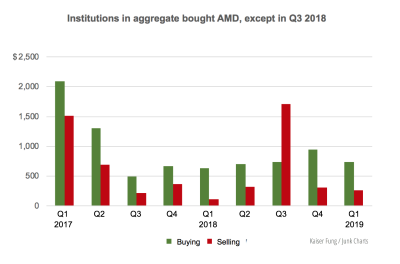 This type of data presents an interesting design challenge. Arguably the most important metric is the net purchases (or the net flow), i.e. inflows minus outflows. And yet, the chart form leaves this element in the gaps, visually.

The outflows are numerically opposite to inflows. The sign of the flow is encoded in the color scheme. An outflow still points upwards. This isn't a criticism, but rather a limitation of the chart form. If the red bars are made to point downwards to indicate negative flow, then the "net flow" is almost impossible to visually compute!

Putting the columns side by side allows the reader to visually compute the gap, but it is hard to visually compare gaps from quarter to quarter because each gap is hanging off a different baseline.

The following graphic solves this issue by focusing the chart on the net flows. The buying and selling are still plotted but are deliberately pushed to the side: 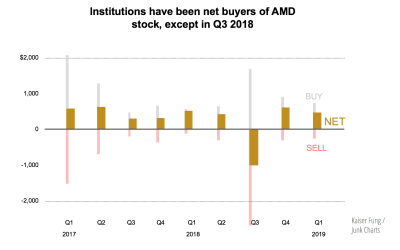 The structure of the data is such that the gray and pink sections are "symmetric" around the brown columns. A purist may consider removing one of these columns. In other words: 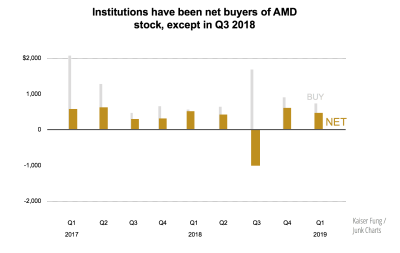 Here, the gray columns represent gross purchases while the brown columns display net purchases. The reader is then asked to infer the gross selling, which is the difference between the two column heights.

We are almost back to the original chart, except that the net buying is brought to the foreground while the gross selling is pushed to the background.