Inspiration from a waterfall of pie charts: illustrating hierarchies

Reader Antonio R. forwarded a tweet about the following "waterfall of pie charts" to me: 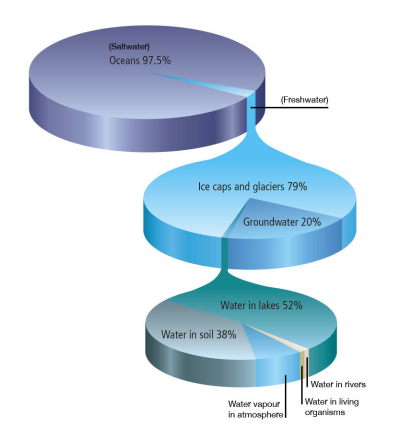 I am immediately attracted to the visual thinking behind this chart. The data are presented in a hierarchy with three levels. The levels are nested in the sense that the pieces in each pie chart add up to 100%. From the first level to the second, the category of freshwater is sub-divided into three parts. From the second level to the third, the "others" subgroup under freshwater is sub-divided into five further categories.

The designer faces a twofold challenge: presenting the proportions at each level, and integrating the three levels into one graphic. The second challenge is harder to master.

The solution here is quite ingenious. A waterfall/waterdrop metaphor is used to link each layer to the one below. It visually conveys the hierarchical structure.

There remains a little problem. There is a confusion related to the part and the whole. The link between levels should be that one part of the upper level becomes the whole of the lower level. Because of the color scheme, it appears that the part above does not account for the entirety of the pie below. For example, water in lakes is plotted on both the second and third layers while water in soil suddenly enters the diagram at the third level even though it should be part of the "drop" from the second layer.

I started playing around with various related forms. I like the concept of linking the layers and want to retain it. Here is one graphic inspired by the waterfall pies from above: