Junk Charts
Welcome Twitter About Book Blog RSS
Inspiration from a waterfall of pie charts: illustrating hierarchies
Tightening the bond between the message and the visual: hello stats-cats

I requested a copy of Jim Albert’s Visualizing Baseball book, which is part of the ASA-CRC series on Statistical Reasoning in Science and Society that has the explicit goal of reaching a mass audience. The best feature of Albert’s new volume is its brevity. For someone with a decent background in statistics (and grasp of basic baseball jargon), it’s a book that can be consumed within one week, after which one receives a good overview of baseball analytics, otherwise known as sabermetrics.

Within fewer than 200 pages, Albert outlines approaches to a variety of problems, including:

Most of the analyses are descriptive in nature, e.g. describing the number and types of pitches thrown by a particular pitcher, or the change in on-base percentage over the career of a particular hitter. A lesser number of pages are devoted to predictive analytics. This structure is acceptable in a short introductory book. In practice, decision-makers require more sophisticated work on top of these descriptive analyses. For example, what’s the value of telling a coach that the home run was the pivotal moment in a 1-0 game that has played out?

To appreciate the practical implications of the analyses included in this volume, I’d recommend reading Moneyball by Michael Lewis, or the more recent Astroball by Ben Reiter.

For the more serious student of sabermetrics, key omitted details will need to be gleaned from other sources, including other books by the same author – for years, I have recommended Curve Ball by Albert and Bennett to my students.

In the final chapters, Albert introduced the simulation of “fake” seasons that underlies predictions. An inquiring reader should investigate how the process is tied back to the reality of what actually happened; otherwise, the simulation will have a life of its own. Further, if one simulates 1,000 seasons of 2018 baseball, a large number of these fake seasons would crown some team other than the Red Sox as the 2018 World Series winner. Think about it: that’s how it is possible to make the prediction that the Red Sox has a say 60 percent chance of winning the World Series in 2018! A key to understanding the statistical way of thinking is to accept the logic of this fake simulated world. It is not the stated goal of Albert to convince readers of the statistical way of thinking – but you’re not going to be convinced unless you think about why we do it this way.

While there are plenty of charts included in the book, a more appropriate title for “Visualizing Baseball” would have been “Fast Intro to Baseball Analytics”. With several exceptions, the charts are not essential to understanding the analyses. The dominant form of exposition is first describe the analytical conclusion, then introduce a chart to illustrate that conclusion. The inverse would be: Start with the chart, and use the chart to explain the analysis.

The visualizations are generally of good quality, emphasizing clarity over prettiness. The choice of sticking to one software, ggplot2 in R, without post-production, constrains the visual designer to the preferences of the software designer. Such limitations are evident in chart elements like legends and titles. Here is one example (Chapter 5, Figure 5.8): 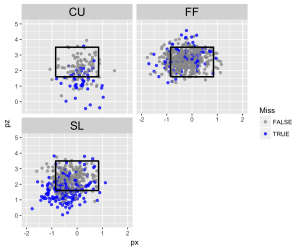 By default, the software prints the names of data columns in the titles. Imagine if the plot titles were Changeup, Fastball and Slider instead of CU, FF and SL. Or that the axis labels were “horizontal location” and “vertical location” (check) instead of px and pz. [Note: The chart above was taken from the book's github site; in the  Figure 5.8 in the printed book, the chart titles were edited as suggested.]

The chart analyzes the location relative to the strike zone of pitches that were missed versus pitches that were hit (not missed). By default, the software takes the name of the binary variable (“Miss”) as the legend title, and lists the values of the variable (“True” and “False”) as the labels of the two colors. Imagine if True appeared as “Miss” and False as “Hit” .

Finally, the chart exhibits over-plotting, making it tough to know how many blue or gray dots are present. Smaller dot size might help, or else some form of aggregation.

Visualizing Baseball is not the book for readers who learn by running code as no code is included in the book. A github page by the author hosts the code, but only the R/ggplot2 code for generating the data visualization. Each script begins after the analysis or modeling has been completed. If you already know R and ggplot2, the github is worth a visit. In any case, I don’t recommend learning coding from copying and pasting clean code.

All in all, I can recommend this short book to any baseball enthusiast who’s beginning to look at baseball data. It may expand your appreciation of what can be done. For details, and practical implications, look elsewhere.

I disagree that using ggplot “without post-production, constrains the visual designer to the preferences of the software designer.” A very broad range of aesthetic elements can be adjusted in ggplot code, including the ones you mention. The author has chosen to go with unmodified software defaults; they could have chosen to aesthetically modify the plots without “post-production”.