Mona Chalabi has made this remarkable graphic to illustrate the effect of the anti-vaccine movement on measles cases in the U.S.: (link) 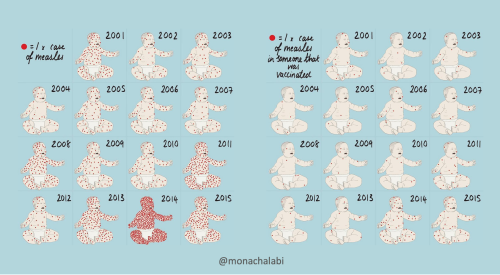 As a form of agitprop, the graphic seizes upon the fear engendered by the defacing red rash of the disease. And it's very effective in articulating its social message.

I wasn't able to find the data except for a specific year or two. So, this post is more inspired by the graphic than a direct response to it.

2013 is a year in which I could find data. In 2013, the U.S. saw 187 cases of measles, only 4 of them in someone who was vaccinated. In other words, there are 49 times as many measles cases among the unvaccinated as the vaccinated.

But note that about 90 percent of the population (using 13-17 year olds as a proxy) are vaccinated. The chance of getting measles in the unvaccinated is 0.8 per million, compared to 0.002 per million in the vaccinated - 422 times higher.

The following chart shows the relative appearance of the dot densities. The bottom row which compares the relative chance of getting measles is the more appropriate metric, and it looks much worse. 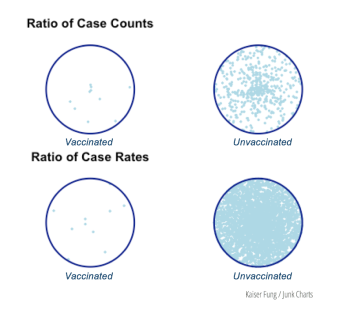