Junk Charts
Welcome Twitter About Book Blog RSS
Light entertainment: the crack pie that escaped and then resurfaced on TV
Form and function: when academia takes on weed

Visually exploring the relationship between college applicants and enrollment

In a previous post, we learned that top U.S. colleges have become even more selective over the last 15 years, driven by a doubling of the number of applicants while class sizes have nudged up by just 10 to 20 percent. 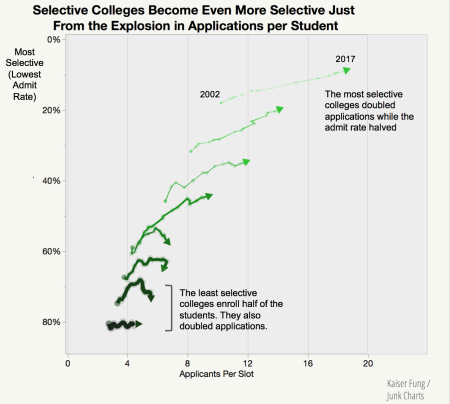 The top 25 most selective colleges are included in the first group. Between 2002 and 2017, their average rate of admission dropped from about 20% to about 10%, almost entirely explained by applicants per student doubling from 10 to almost 20. A similar upward movement in selectivity is found in the first four groups of colleges, which on average accept at least half of their applicants.

Most high school graduates however are not enrolling in colleges in the first four groups. Actually, the majority of college enrollment belongs to the bottom two groups of colleges. These groups also attracted twice as many applicants in 2017 relative to 2002 but the selectivity did not change. They accepted 75% to 80% of applicants in 2002, as they did in 2017.

In this post, we look at a different view of the same data. The following charts focus on the growth rates, indexed to 2002. 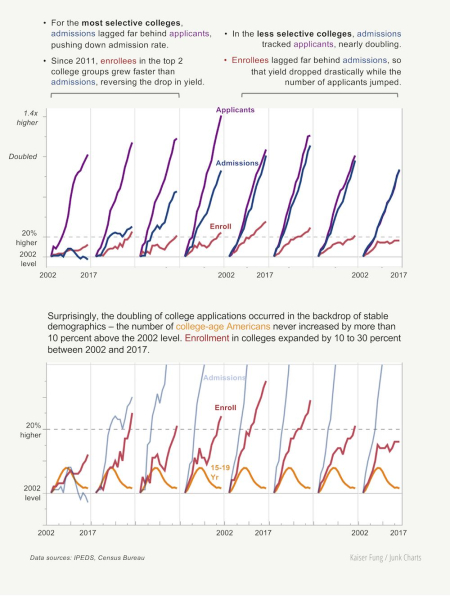 To my surprise, the number of college-age Americans  grew by about 10% initially but by 2017 has dropped back to the level of 2002. Meanwhile, the number of applications to the colleges continues to climb across all eight groups of colleges.

Enrollment has not kept up. Class sizes expanded about 10 to 30 percent in those 15 years, lagging way behind applications and admissions.

How do we explain the incremental applications?