The Bumps come to the NBA, courtesy of 538

The team at 538 did a post-mortem of their in-season forecasts of NBA playoffs, using Bumps charts. These charts have a long history and can be traced back to Cambridge rowing. I featured them in these posts from a long time ago (link 1, link 2).

Here is the Bumps chart for the NBA West Conference showing all 15 teams, and their ranking by the 538 model throughout the season. 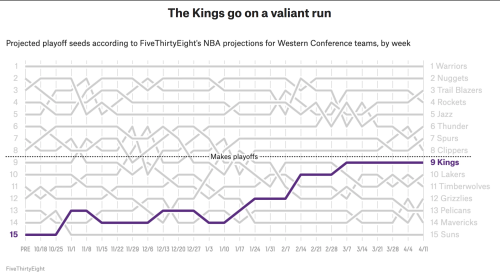 The highlighted team is the Kings. It's a story of ascent especially in the second half of the season. It's also a story of close but no cigar. It knocked at the door for the last five weeks but failed to grab the last spot. The beauty of the Bumps chart is how easy it is to see this story.

Now, if you'd focus on the dotted line labeled "Makes playoffs," and note that beyond the half-way point (1/31), there are no further crossings. This means that the 538 model by that point has selected the eight playoff teams accurately.

Now what about NBA East? 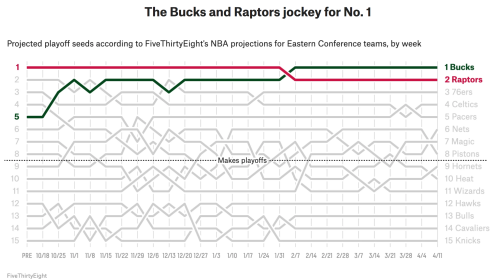 This chart highlights the two top teams. This conference is pretty easy to predict at the top.

What is interesting is the spaghetti around the playoff line. The playoff race was heart-stopping and it wasn't until the last couple of weeks that the teams were settled.

Also worthy of attention are the bottom-dwellers. Note that the chart is disconnected in the last four rows (ranks 12 to 15). These four teams did not ever leave the cellar, and the model figured out the final rankings around February.

Using a similar analysis, you can see that the model found the top 5 teams by mid December in this Conference, as there are no further crossings beyond that point.

***
Go check out the FiveThirtyEight article for their interpretation of these charts.

While you're there, read the article about when to leave the stadium if you'd like to leave a baseball game early, work that came out of my collaboration with Pravin and Sriram.

When I see "bumps chart" mentioned on Junk Charts I fear it's going to be another line chart (quantity vs stage), but this is the real deal (rank vs stage).

derek: this is a nice example of the canonical Bumps chart. I don't see a need to classify those two charts as different types, just as we don't give different names to quantity vs time and rank vs time.