Say it thrice: a nice example of layering and story-telling

I enjoyed the New York Times's data viz showing how actively the Democratic candidates were criss-crossing the nation in the month of March (link).

It is a great example of layering the presentation, starting with an eye-catching map at the most aggregate level. The designers looped through the same dataset three times. 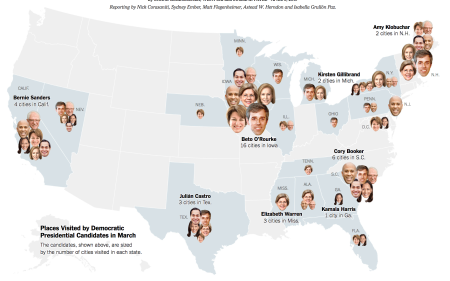 This compact display packs quite a lot. We can easily identify which were the most popular states; and which candidate visited which states the most.

I noticed how they handled the legend. There is no explicit legend. The candidate names are spread around the map. The size legend is also missing, replaced by a short sentence explaining that size encodes the number of cities visited within the state. For a chart like this, having a precise size legend isn't that useful.

The next section presents the same data in a small-multiples layout. The heads are replaced by dots.

This allows more precise comparison of one candidate to another, and one location to another.

This display has one shortcoming. If you compare the left two maps above, those for Amy Klobuchar and Beto O'Rourke, it looks like they have visited roughly similar number of cities when in fact Beto went to 42 compared to 25. Reducing the size of the dots might work.

Then, in the third visualization of the same data, the time dimension is emphasized. Lines are used to animate the daily movements of the candidates, one by one. 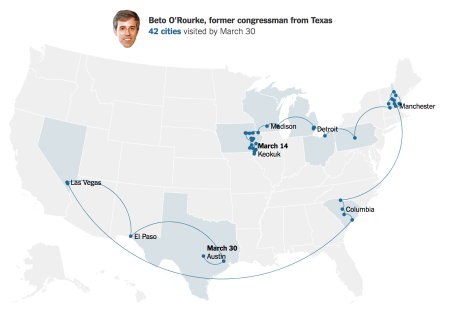 When repetition is done right, it doesn't feel like repetition.