Nice example of visual story-telling in the FT

I came across this older chart in the Financial Times, which is a place to find some nice graphics: 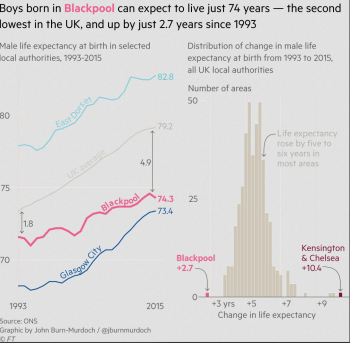 The key to success here is having a good story to tell. Blackpool is an outlier when it comes to improvement in life expectancy since 1993. Its average life expectancy has improved, but the magnitude of improvement lags other areas by quite a margin.

The design then illustrates this story in two ways.

On the right side, one sees Blackpool occupying a lone spot on the left side of the histogram. On the left chart, the gap between Blackpool and the national average is plotted over time. The gap is clearly widening; the size of the gap is labeled so the reader immediately knows it went from 1.8 to 4.9.

Although they're not labeled, the reader understand that the other two lines are the best and worst areas. The comparison between Glasgow City and Blackpool is also informative. Glasgow City, which has the worst life expectancy in the U.K. is fast catching up with Blackpool, the second worst.

I also like color-coded titles. It draws attention to Blackpool and it links the conclusion to both charts in an efficient manner.