Transforming the data to fit the message

A short time ago, there were reports that some theme-park goers were not happy about the latest price hike by Disney. One of these report, from the Washington Post (link), showed a chart that was intended to convey how much Disney park prices have outpaced inflation. Here is the chart: 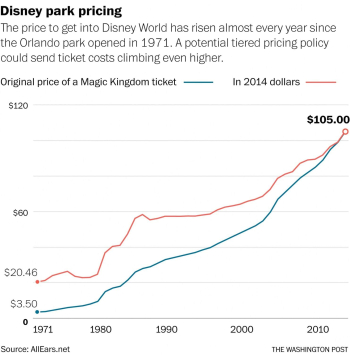 I had a lot of trouble processing this chart. The two lines are labeled "original price" and "in 2014 dollars". The lines show a gap back in the 1970s, which completely closes up by 2014. This gives the reader an impression that the problem has melted away - which is the opposite of the designer intended.

The economic concept being marshalled here is the time value of money, or inflation. The idea is that $3.50 in 1971 is equivalent to a much higher ticket price in "2014 dollars" because by virtue of inflation, putting that $3.50 in the bank in 1971 and holding till 2014 would make that sum "nominally" higher. In fact, according to the chart, the $3.50 would have become $20.46, an approx. 7-fold increase.

The gap thus represents the inflation factor. The gap melting away is a result of passing of time. The closer one is to the present, the less the effect of cumulative inflation. The story being visualized is that Disney prices are increasing quickly whether or not one takes inflation into account. Further, if inflation were to be considered, the rate of increase is lower (red line).

What about the alternative story - Disney's price increases are often much higher than inflation? We can take the nominal price increase, and divide it into two parts, one due to inflation (of the prior-period price), and the other in excess of inflation, which we will interpret as a Disney premium.

The following chart then illustrates this point of view: 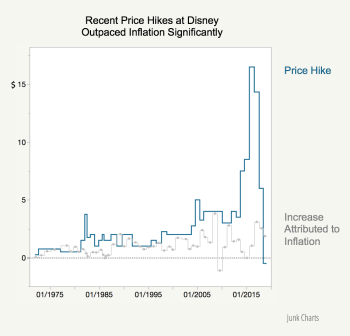 Most increases are small, and stay close to the inflation rate. But once in a while, and especially in 2010s, the price increases have outpaced inflation by a lot.

Note: since 2013, Disney has introduced price tiers, starting with two and currently at four levels. In the above chart, I took the average of the available prices, making the assumption that all four levels are equally popular. The last number looks like a price decrease because there is a new tier called "Low". The data came from AllEars.net.