Check out the Lifespan of News project

Alberto Cairo introduces another one of his collaborations with Google, visualizing Google search data. We previously looked at other projects here.

The latest project, designed by Schema, Axios, and Google News Initiative, tracks the trending of popular news stories over time and space, and it's a great example of making sense of a huge pile of data.

The design team produced a sequence of graphics to illustrate the data. The top news stories are grouped by category, such as Politics & Elections, Violence & War, and Environment & Science, each given a distinct color maintained throughout the project.

The first chart is an area chart that looks at individual stories, and tracks the volume over time. 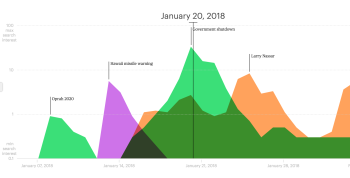 To read this chart, you have to notice that the vertical axis measuring volume is a log scale, meaning that each tick mark up represents a 10-fold increase. Log scale is frequently used to draw far-away data closer to the middle, making it possible to see both ends of a wide distribution on the same chart. The log transformation introduces distortion deliberately. The smaller data look disproportionately large because of it.

The time scrolls automatically so that you feel a rise and fall of various news stories. It's a great way to experience the news cycle in the past year. The overlapping areas show competing news stories that shared the limelight at that point in time.

Just bear in mind that you have to mentally reverse the distortion introduced by the log scale.

In the second part of the project, they tackle regional patterns. Now you see a map with proportional symbols. The top story in each locality is highlighted with the color of the topic. As time flows by, the sizes of the bubbles expand and contract. 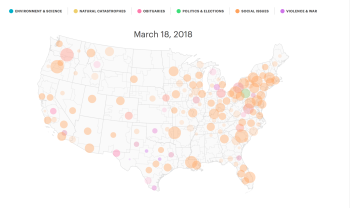 Sometimes, the entire nation was consumed by the same story, e.g. certain obituaries. At other times, people in different regions focused on different topics.

In the last part of the project, they describe general shapes of the popularity curves. Most stories have one peak although certain stories like U.S. government shutdown will have multiple peaks. There is also variation in terms of how fast a story rises to the peak and how quickly it fades away.

The most interesting aspect of the project can be learned from the footnote. The data are not direct hits to the Google News stories but searches on Google. For each story, one (or more) unique search terms are matched, and only those stories are counted. A "control" is established, which is an excellent idea. The control gives meaning to those counts. The control used here is the number of searches for the generic term "Google News." Presumably this is a relatively stable number that is a proxy for general search activity. Thus, the "volume" metric is really a relative measure against this control.