Tim Harford tweeted about a nice project visualizing of the world's distribution of population, and wondered why he likes it so much.

That's the question we'd love to answer on this blog! Charts make us emotional - some we love, some we hate. We like to think that designers can control those emotions, via design choices.

I also happen to like the "Population Mountains" project as well. It fits nicely into a geography class.

The key feature is to adopt a 3D column chart form, instead of the more conventional choropleth or dot density. The use of columns is particularly effective here because it is natural - cities do tend to expand vertically upwards when ever more people cramp into the same amount of surface area. 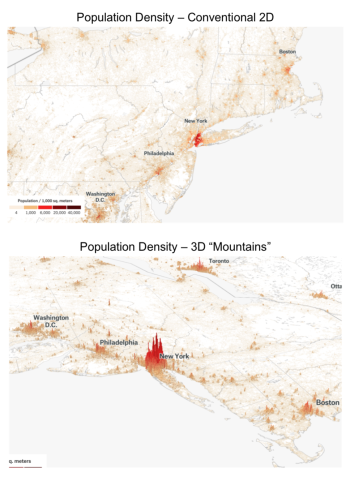 Imagine the same chart form is used to plot the number of swimming pools per square meter. It just doesn't make the same impact.

Also, notice that the color intervals in 5-color scale is not set uniformly because there is a power law in effect - the dense areas are orders of magnitude denser than the sparsely populated areas, and most locations are low-density.

These decisions have a strong influence on the perception of the information: it affects the heights of the peaks, the contrasts between the highs and lows, etc. It also injects a degree of subjectivity into the data visualization exercise that some find offensive.

The background map is stripped of unnecessary details so that the attention is focused on these "population mountains". No unnecessary labels, roads, relief, etc. This demonstrates an acute awareness of foreground/background issues.

4. Insights on the "shape" of the data

What stands out is each city’s form, a unique mountain that might be like the steep peaks of lower Manhattan or the sprawling hills of suburban Atlanta. When I first saw a city in 3D, I had a feel for its population size that I had never experienced before.

I'd strike out population size and replace with population density. In theory, the sum of the areas of the columns in any given surface area gives you the "population size" but given the fluctuating heights of these columns, and the different surface areas (sprawls) of different cities, it is an Olympian task to estimate the volumes of the population mountains!

The more salient features of these mountains, most easily felt by readers, are the heights of the peak columns, the sprawl of the cities, and the general form of the mass of columns. The volume of the mountain is one of the tougher things to see. Similarly, the taller 3D columns hide what's behind them, and you'd need to spin and rotate the map to really get a good feel.

Here is the contrast between Paris and London, with comparable population sizes. You can see that the population in Paris (and by extension, France) is much more concentrated than in the U.K. This difference is a surprise to me.

Some of the other mountains, especially those in India and China, look a bit odd to me, which leads me to wonder about the source of the data. This project has a very great set of footnotes that not only point to the source of the data but also a discussion of its limitations, including the possibility of inaccuracies in places like India and China.

One thing I did notice is that the colour scales have labels centred beneath them. But the population densities in the labels are the bounds between two labels, so the labels should be centred on the colour boundaries.

This is something you see a lot with histograms, because the Excel default is that you must have labels under the columns. I hand roll histogram labels for this reason, placing them under the boundary between two columns.

Derek: good point. Was wondering if those numbers were boundaries or midpoints.