NYT hits the trifecta with this market correction chart

Yesterday, in the front page of the Business section, the New York Times published a pair of charts that perfectly captures the story of the ongoing turbulence in the stock market.

Here is the first chart: 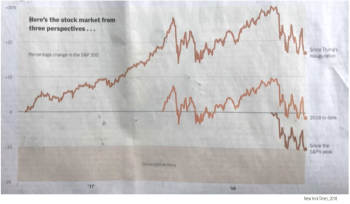 Most market observers are very concerned about the S&P entering "correction" territory, which the industry arbitrarily defines as a drop of 10% or more from a peak. This corresponds to the shortest line on the above chart.

The chart promotes a longer-term reflection on the recent turbulence, using two reference points: the index has returned to the level even with that at the start of 2018, and about 16 percent higher since the beginning of 2017.

This is all done tastefully in a clear, understandable graphic.

Then, in a bit of a rhetorical flourish, the bottom of the page makes another point: 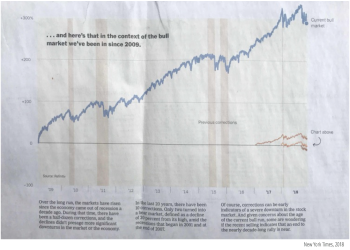 A connection is made between the two charts via the color of the lines, plus the simple, effective annotation "Chart above".

The second chart adds even more context, through vertical bands indicating previous corrections (drops of at least 10%). These moments are connected to the first graphic via the beige color. The extra material conveys the message that the market has survived multiple corrections during this long bull period.

Together, the pair of charts addresses a pressing current issue, and presents a direct, insightful answer in a simple, effective visual design, so it hits the Trifecta!

There are a couple of interesting challenges related to connecting plots within a multiple-plot framework.

While the beige color connects the concept of "market correction" in the top and bottom charts, it can also be a source of confusion. The orientation and the visual interpretation of those bands differ. The first chart uses one horizontal band while the chart below shows multiple vertical bands. In the first chart, the horizontal band refers to a definition of correction while in the second chart, the vertical bands indicate experienced corrections.

Is there a solution in which the bands have the same orientation and same meaning?

These graphs solve a visual problem concerning the visualization of growth over time. Growth rates are anchored to some starting time. A ten-percent reduction means nothing unless you are told ten-percent of what.

The first chart depicts this visual challenge well. Look at the start of 2018. This second line appears as if you can just reset the start point to 0, and drag the remaining portion of the line down. The part of the top line (to the right of Jan 2018) looks just like the second line that starts at Jan 2018. 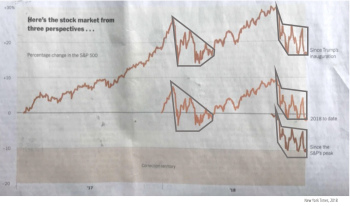 However, a closer look reveals that the shape may be the same but the magnitude isn't. There is a subtle re-scaling in addition to the re-set to zero.

The same thing happens at the starting moment of the third line. You can't just drag the portion of the first or second line down - there is also a needed re-scaling.