Another experiment with enhanced pictogram

In a previous post, I experimented with an idea around enhancing pictograms. These are extremely popular charts used to show countable objects. I found another example in Business Insider's analysis of the mid-term election results. Here is an excerpt of a pair of pictograms that show the relative performance of Republicans and Democrats in districts that are classified as "Pure Rural" or "Rural-Suburban": 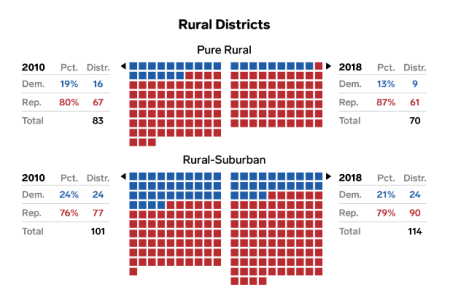 (Note that there is an error in the bottom left chart. There should be 24 blue squares not 34! In the remainder of the post, I will retain this error so that the revisions are comparable to the original.)

Anyone who learn of the above trends probably did so by reading off the data tables on the sides. It's a given that those tables, or simple bar charts can be more effective with this dataset.

What I like to explore is the pictogram, assuming that we are required to use a pictogram. Can the pictogram be enhanced to overcome some of its weaknesses?

The defining characteristic of the pictogram is the presence of individual units, which means the reader can count the units. This feature is also its downfall. In most pictograms, it is a bear to count the units. Try counting out the blue and red squares in the above image - and don't cheat by staring at the data tables!

My goal is to enhance the pictogram by making it easier for readers to count the units. The strategy is to place cues so that the units can be counted in larger groups like 5 or 10. Also, when possible, exploit symmetry. 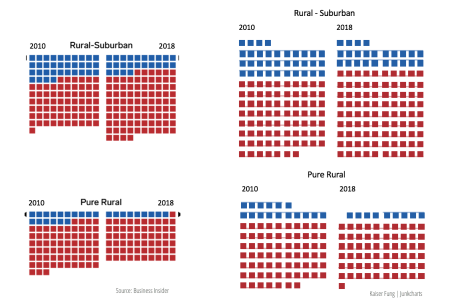