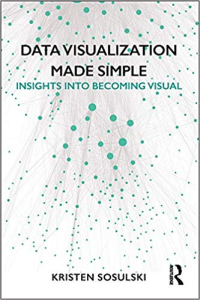 At the Meetup, we announced a Part-Time Immersive Program. This allows the completion of the Certified Data Specialist program in three levels on a more relaxed, evening schedule. Level 1 will run two nights a week for 12 weeks, starting Spring 2019. For more details, contact us here.

Kristen, a professor in the Stern School, has an interesting take on the data visualization function – placing it within the larger enterprise. In the first part of her talk, she presents a number of real-world case examples of how data analysts used data visualization to create impact within an organization.

The end goal in each of these projects is a “business insight” that is delivered to decision-makers with the primary goal of persuasion – something I also emphasize in my own seminars. It’s not that data visualization isn’t used for analysis, exploration, and story-telling (see postscript), and so on but at the tail end of the process, the need to persuade becomes paramount.

For example, the graphic on the cover of her book is from a project undertaken by Jet.com, the online retailer purchased by Walmart. The managers are interested in the patterns of purchasing of the customers, and generally views products as “consumables” or “durables,” the latter have lower purchasing frequencies. The nodes in the network graph are colored accordingly. Through the links between these nodes, the analyst concluded that certain products (an example given was batteries) are considered durables but have purchasing patterns that appear more like consumables.

Kristen’s message is how the data turned into a business insight (the “story”) which impressed the managers enough so that they took action by adjusting orders and inventories.

Kristen described other examples such as the use of salary data to place employees into bands, or the use of predictive models to predict which partners in a venture-capital firm will bring in more investment. Many of these examples make me believe that a course of causal reasoning should be required for all data analysts.

The second half of Kristen’s talk addresses how to raise the profile of data visualization within an enterprise. This is a clearly needed discussion. More and more industry jobs are created that are specific to data visualization so these new teams must establish themselves within the corporate culture. Kristen recommends a five-step process, starting with establishing a data practice and ending with measuring one’s impact.

In answering my question about evangelizing new visualization formats to replace inferior existing chart designs, she emphasizes the need to involve stakeholders early in the process. Don't surprise them with something novel during a meeting.

We were pleased that people braved the adverse weather to attend Kristen’s talk, and good pizza was served at the end of the evening.

The word “story-telling” seems to have gone from hero to villain lately. Some commenters are thinking the word “story” implies made-up fiction, and thus oppose its use. A related complaint concerns the “subjectivity” of stories. Once you realize that most of our data sources are observational in nature, you will soon discover that causal reasoning entails the selection of the most plausible story among many. Statisticians and others have come up with causal models, which are sets of equations used to describe relationships between data, but all of these rely on causal assumptions. In essence, they are structured ways to select the most plausible story. It’s dangerous to see these models as “objective.”