Sneaky Pete via Twitter sent me the following chart, asking for guidance: This is a pretty standard dataset, frequently used in industry. It shows a breakdown of a company's profit by business unit, here classified by "state". The profit projection for the next year is measured on both absolute dollar terms and year-on-year growth.

Since those two metrics have completely different scales, in both magnitude and unit, it is common to use dual axes. In the case of the Economist, they don't use dual axes; they usually just print the second data series in its own column.

I first recommended looking at the scatter plot to see if there are any bivariate patterns. In this case, not much insights are provided via the scatter.

From there, I looked at the data again, and ended up with the following pair of bumps charts (slopegraphs): 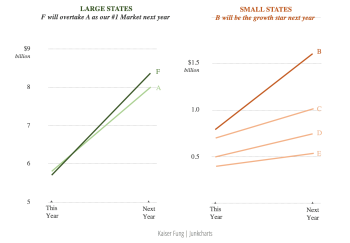 A second key observation is that the business units are divided into two groups, the two large states (A and F) and the small states (B to E). This is a Pareto principle that very often applies to real-world businesses, i.e. a small number of entities contribute most of the revenues (or profits). It is very likely that these businesses are structured to serve the large and small states differently, and so the separation onto two charts mirrors the internal structure.

Then, within each chart, there is a message. For the large states, it looks like state F is projected to overtake state A next year. That is a big deal because we're talking about the largest unit in the entire company.

For the small states, the standout is state B, decidedly more rosy than the other three small states with similar projected growth rates.

Note also I chose to highlight the actual dollar profits, letting the growth rates be implied in the slopes. Usually, executives are much more concerned about hitting a dollar value than a growth rate target. But that, of course, depends on your management's preference.