Note about last week: While not blogging, I delivered four lectures on three topics over five days: one on the use of data analytics in marketing for a marketing class at Temple; two on the interplay of analytics and data visualization, at Yeshiva and a JMP Webinar; and one on how to live during the Data Revolution at NYU.

This week, I'm back at blogging.

McKinsey publishes a report confirming what most of us already know or experience - the explosion of data jobs that just isn't stopping.

On page 5, it says something that is of interest to readers of this blog: "As data grows more complex, distilling it and bringing it to life through visualization is becoming critical to help make the results of data analyses digestible for decision makers. We estimate that demand for visualization grew roughly 50 percent annually from 2010 to 2015." (my bolding)

The report contains a number of unfortunate graphics. Here's one:

I applied my self-sufficiency test by removing the bottom row of data from the chart. Here is what happened to the second circle, representing the fraction of value realized by the U.S. health care industry. 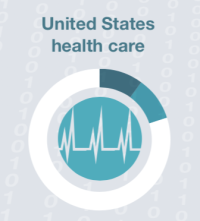 What does the visual say? This is one of the questions in the Trifecta Checkup. We see three categories of things that should add up to 100 percent. With a little more effort, we find the two colored categories are each 10% while the white area is 80%.

But that's not what the data say, because there is only one thing being measured: how much of the potential has already been realized. The two colors is an attempt to visualize the uncertainty of the estimated proportion, which in this case is described as 10 to 20 percent underneath the chart.

A first attempt to fix this might be to use line segments instead of colored arcs.

The middle diagram emphasizes the mid-point estimate while the right diagram, the range of estimates. Observe how differently these two diagrams appear from the original one shown on the left.

This design only works if the reader perceives the chart as a "racetrack" chart. You have to see the invisible vertical line at the top, which is the starting line, and measure how far around the track has the symbol gone. I have previously discussed why I don't like racetracks (for example, here and here).

Here is a sketch of another design: 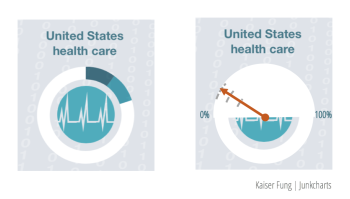 The center figure will have to be moved and changed to a different shape. This design conveys the sense of a goal (at 100%) and how far one is along the path. The uncertainty is represented by wave-like elements that make the exact location of the pointer arrow appear as wavering.

At least they were committed to demonstrating the problem! :D

Who is mckinsey? Reference?

Mike: Looks like I forgot to place the link to the report. From that page, there is a button up top to click to the PDF version of the report. Who is McKinsey? It's an extremely influential management consulting company that has also been implicated in various scandals. Here's Wikipedia's take.