The French takes back cinema but can you see it?

I like independent cinema, and here are three French films that come to mind as I write this post: Delicatessen, The Class (Entre les murs), and 8 Women (8 femmes).

The French people are taking back cinema. Even though they purchased more tickets to U.S. movies than French movies, the gap has been narrowing in the last two decades. How do I know? It's the subject of this infographic: 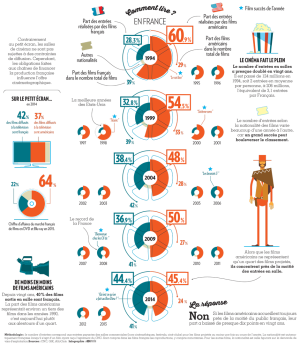 How do I know? That's not easy to say, given how complicated this infographic is. Here is a zoomed-in view of the top of the chart:

You've got the slice of orange, which doubles as the imagery of a film roll. The chart uses five legend items to explain the two layers of data. The solid donut chart presents the mix of ticket sales by country of origin, comparing U.S. movies, French movies, and "others". Then, there are two thin arcs showing the mix of movies by country of origin.

The donut chart has an usual feature. Typically, the data are coded in the angles at the donut's center. Here, the data are coded twice: once at the center, and again in the width of the ring. This is a self-defeating feature because it draws even more attention to the area of the donut slices except that the areas are highly distorted. If the ratios of the areas are accurate when all three pieces have the same width, then varying those widths causes the ratios to shift from the correct ones!

The best thing about this chart is found in the little blue star, which adds context to the statistics. The 61% number is unusually high, which demands an explanation. The designer tells us it's due to the popularity of The Lion King.

The design is most unusual. The years 1994, 1999, 2004, 2009, 2014 receive special attention. The in-between years are split into two pairs, shrunk, and placed alternately to the right and left of the highlighted years. So your eyes are asked to zig-zag down the page in order to understand the trend.

To see the change of U.S. movie ticket sales over time, you have to estimate the sizes of the red-orange donut slices from one pie chart to another.

Here is an alternative visual design that brings out the two messages in this data: that French movie-goers are increasingly preferring French movies, and that U.S. movies no longer account for the majority of ticket sales. 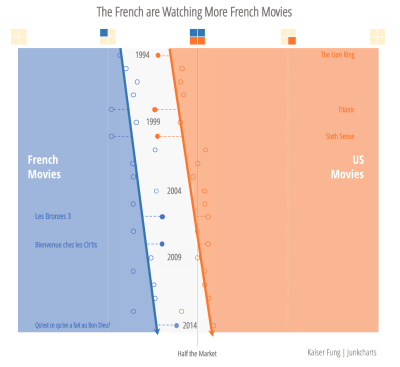 A long-term linear trend exists for both U.S. and French ticket sales. The "outlier" values are highlighted and explained by the blockbuster that drove them.

1. You can register for the free seminar in Lyon here. To register for live streaming, go here.
2. Thanks Carla Paquet at JMP for help translating from French.