Junk Charts
Welcome Twitter About Book Blog RSS
The French takes back cinema but can you see it?
Webinar Wednesday

On my flight back from Lyon, I picked up a French magazine, and found the following chart: 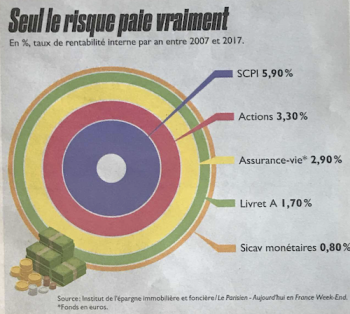 A quick visit to Bing Translate tells me that this chart illustrates the rates of return of different types of investments. The headline supposedly says "Only the risk pays". In many investment brochures, after presenting some glaringly optimistic projections of future returns, the vendor legally protects itself by proclaiming "Past performance does not guarantee future performance."

For this chart, an appropriate warning is PLOTTED PERFORMANCE GUARANTEED NOT TO PREDICT THE FUTURE!

1. The tree ring imagery, which codes the data in the widths of concentric rings around a common core

2. The placement of larger numbers toward the middle, and smaller numbers in the periphery.

When a reader takes in the visual design of this chart, what is s/he drawn to?

The designer evidently hopes the reader will focus on comparing the widths of the rings (A), while ignoring the areas or the circumferences. I think it is more likely that the reader will see one of the following:

(B) the relative areas of the tree rings

(C) the areas of the full circles bounded by the circumferences

(D) the lengths of the outer rings

(E) the lengths of the inner rings

Here is a visualization of six ways to "see" what is on the French rates of return chart: 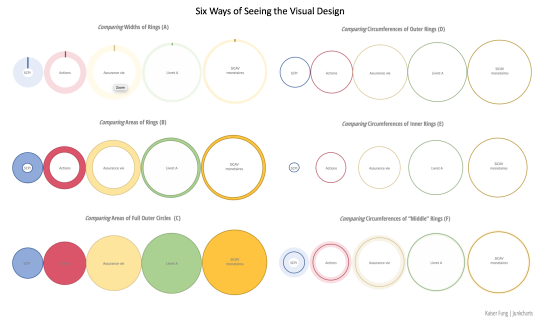 The level of distortion is visualized in the following chart: 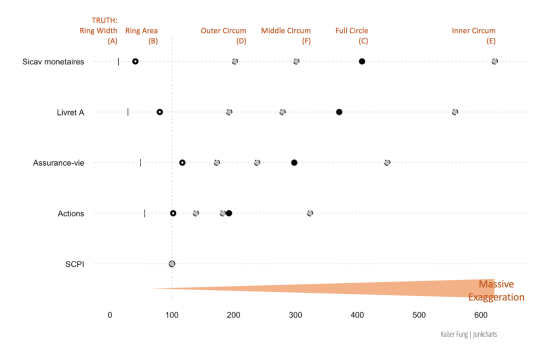 Here, I normalized everything to the size of the SCPI data. The true data is presented by the ring width column, represented by the vertical stripes on the left. If the comparisons are not distorted, the other symbols should stay close to the vertical stripes. One notices there is always distortion in cases (B)-(F). This is primarily due to the placement of the large numbers near the center and the small numbers near the edge. In other words, the radius is inversely proportional to the data!

The amount of distortion for most cases ranges from 2 to 6 times.

While the "ring area" (B) version is least distorted on average, it is perhaps the worst of the six representations. The level of distortion is not a regular function of the size of the data. The "sicav monetaries" (smallest data) is the least distorted while the data of medium value are the most distorted.

To improve this chart, take a hint from the headline. Someone recognizes that there is a tradeoff between risk and return. The data series shown, which is an annualized return, only paints the return part of the relationship.

Great breakdown of the different ways the visual could be interpreted.

For the record, in instinctively look at the ring width, but rather than the way you visualize it, I see it as a stacked bar:

I think that's the easiest way to make sense of such a poor way of displaying the data, but of course it assumes that the designer intended width to encode the values, which in this case works out.