Junk Charts
Welcome Twitter About Book Blog RSS
Made in France stereotypes
The French takes back cinema but can you see it?

No Latin honors for graphic design 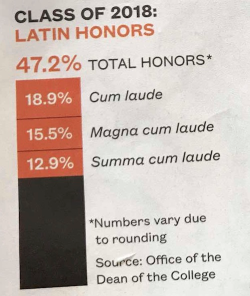 This chart appeared on a recent issue of Princeton Alumni Weekly.

If you read the sister blog, you'll be aware that at most universities in the United States, every student is above average! At Princeton,  47% of the graduating class earned "Latin" honors. The median student just missed graduating with honors so the honors graduate is just above average! The 47% number is actually lower than at some other peer schools - at one point, Harvard was giving 90% of its graduates Latin honors.

Side note: In researching this post, I also learned that in the Senior Survey for Harvard's Class of 2018, two-thirds of the respondents (response rate was about 50%) reported GPA to be 3.71 or above, and half reported 3.80 or above, which means their grade average is higher than A-.  Since Harvard does not give out A+, half of the graduates received As in almost every course they took, assuming no non-response bias.

Back to the chart. It's a simple chart but it's not getting a Latin honor.

The sequencing of the honor levels is backwards. Summa should be on top.

Warning: the remainder of this post is written for graphics die-hards. I go through a bunch of different charts, exploring some fine points.

People often complain that bar charts are boring. A trendy alternative when it comes to count or percentage data is the "pictogram."

Here are two versions of the pictogram. On the left, each percent point is shown as a dot. Then imagine each dot turned into a square, then remove all padding and lines, and you get the chart on the right, which is basically an area chart. 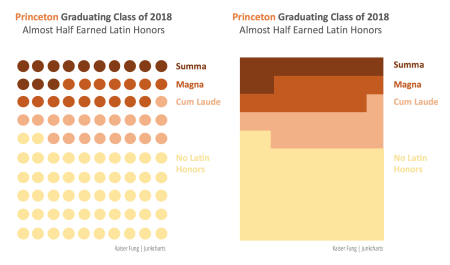 The area chart is actually worse than the original column chart. It's now much harder to judge the areas of irregularly-shaped pieces. You'd have to add data labels to assist the reader.

The 100 dots is appealing because the reader can count out the number of each type of honors. But I don't like visual designs that turn readers into bean-counters.

So I experimented with ways to simplify the counting. If counting is easier, then making comparisons is also easier.

Start with this observation: When asked to count a large number of objects, we group by 10s and 5s.

So, on the left chart below, I made connectors to form groups of 5 or 10 dots. I wonder if I should use different line widths to differentiate groups of five and groups of ten. But the human brain is very powerful: even when I use the same connector style, it's easy to see which is a 5 and which is a 10. 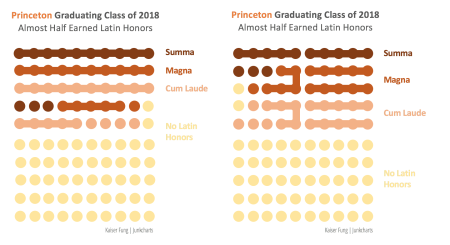 The right chart is even more experimental. The anti-principle is to allow bending of the connectors. I also give up on using both 5- and 10-groups. By only using 5-groups, readers can rely on their instinct that anything connected (whether straight or bent) is a 5-group. This is powerful. It relieves the effort of counting while permitting the dots to be packed more tightly by respective color.

Of course, if the message you want to convey is that roughly half the graduates earn honors, and those honors are split almost even by thirds, then the column chart is sufficient. If you do want to use a pictogram, spend some time thinking about how you can reduce the effort of the counting!

Grade inflation at Harvard is a big joke at the University of Chicago, where I have spent 28 years. A popular T-shirt at the U of C reads, "If I'd wanted an A I would have gone to Harvard."

I've read though this on a few different occasions now.
I hesitate, because I don't want to seem like I only post negative thoughts...

Wow.
It's interesting to read through your thought process to get to the end state here, but omg... :o

This connected pictogram and it's ordering of data points is so complex and hard to understand that I wouldn't even know where to start. I've got dots, I've got bars, I've got angled bars, I've got a split down the middle, the angles are different directions...so many things that might mean something, or might not... ¯\_(ツ)_/¯

We have essentially one number to report, and if we get crazy, three additional numbers that combine to make it. I'd be most inclined to present this simply as text, almost the way you have the chart title/subtitle now:

"Nearly Half of Princeton Graduates Earned Latin Honors in 2018"

People like to see numbers, so maybe a large "47%" with smaller text of "of Princeton Graduates Earned Latin Honors in 2018" to punch it up a little. Something as simple as:
https://imgur.com/2fk0DDX

If a graphic was really necessary...I'd do a simple stacked bar, similar to what they did, just...cleaner.

JB: Thanks for the comment. The point of this post is to generate some discussion so that we can move forward. That said, I think you missed the bigger point, which is that pictograms aren't that great, so we actually agree on the bottom line. However, the point of the post is to acknowledge the proliferation of pictograms out there. A lot of designers like this format. What I'm trying to do is to improve it. The other point you missed (or, can be stated as "I missed") is that once the reader recognizes that the linked pieces are all 5 dots, then the reader can ignore the shape of those linked pieces, and by doing so, it gives the designer much more flexibility in terms of organizing the dots. Of course, this works only if the reader is willing to ignore those shapes.

"I think you missed the bigger point, which is that pictograms aren't that great, so we actually agree on the bottom line"

"However, the point of the post is to acknowledge the proliferation of pictograms out there. A lot of designers like this format. What I'm trying to do is to improve it."

I think realistically, if we're going a pictogram direction, the original is the best version explored here. I do lament the proliferation of these, unit charts, waffle charts/square pies, etc.

This is where we definitely disagree. There's no way a user is going to disregard something as fundamental as the shape of an object in a graph. Such a difference in shape, if used, *should* mean something.

The connections themselves, the varied shapes, the symmetrical split, IMO, do the very opposite of what you've attempted to have them do. The visual clutter that they add is, to me as an end user, nearly insurmountable.

Instead simplifying the counting, you've now given multiple types of things to count, in multiple configurations, and out of order.

To back up to another part of your point:

They do, and I'm so very tired of hearing it. It's not meant to be exciting. It's meant to effectively communicate data. If you want something exciting to draw people in, provide an exciting illustration, and exciting headline, etc. Then present the data clearly. I know you're not necessarily arguing that bar charts are boring, I just want to include my response to that sentiment.

"The point of this post is to generate some discussion so that we can move forward."