Made in France stereotypes

France is on my mind lately, as I prepare to bring my dataviz seminar to Lyon in a couple of weeks.  (You can still register for the free seminar here.)

The following Made in France poster brings out all the stereotypes of the French. 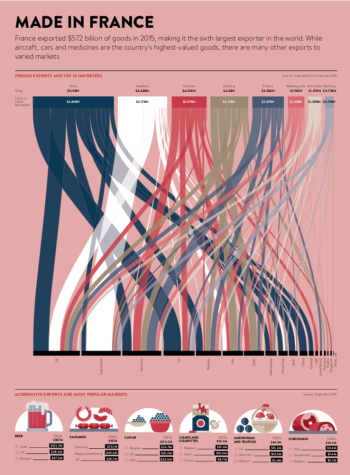 It's a sankey diagram with so many flows that it screams "it's complicated!" This is an example of a graphic for want of a story. In a Trifecta Checkup, it's failing in the Q(uestion) corner.

It's also failing in the D(ata) corner. Take a look at the top of the chart.

France exported $572 billion worth of goods. The diagram then plots eight categories of exports, ranging from wines to cheeses:

Wine exports totaled $9 billion which is about 1.6% of total exports. That's the largest category of the eight shown on the page. Clearly the vast majority of exports are excluded from the sankey diagram.

Are the 8 the largest categories of exports for France? According to this site, those are (1) machinery (2) aircraft (3) vehicles (4) electrical machinery (5) pharmaceuticals (6) plastics (7) beverages, spirits, vinegar (8) perfumes, cosmetics.

It's stereotype central. Name 8 things associated with the French brand and cherry-pick those.

Within each category, the diagram does not show all of the exports either. It discloses that the bars for wines show only $7 of the $9 billion worth of wines exported. This is because the data only capture the "Top 10 Importers." (See below for why the designer did this... France exports wine to more than 180 countries.)

Finally, look at the parade of key importers of French products, as shown at the bottom of the sankey:

The problem with interpreting this list of countries is best felt by attempting to describe which countries ended up on this list! It's the list of countries that belong to the top 10 importers of one or more of the eight chosen products, ordered by the total value of imports in those 8 categories only but only including the value in any category if it rises to the top 10 of the respective category.

In short, with all those qualifications, the size or rank of the black bars does not convey any useful information.

One feature of the chart that surprised me was no flows in the Wine category from France to Italy or Spain. (Based on the above discussion, you should realize that no flows does not mean no exports.) So I went to the Comtrade database that is referenced in the poster, and pulled out all the wine export data.

How does one visualize where French wines are going? After fiddling around the numbers, I came up with the following diagram: 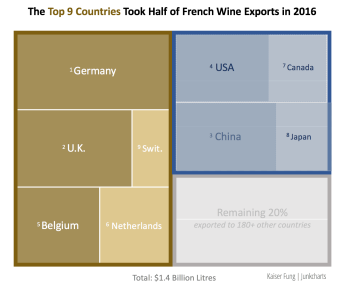 I like this type of block diagram which brings out the structure of the dataset. The key features are:

The most time-consuming part of this exercise was finding the appropriate structure which can be easily explained in a visual manner.

The Lyon seminar will be streamed live on Oct 18. Register here.