A reader submitted the following chart from Pew Research for discussion. The reader complained that this chart was difficult to comprehend. What are some of the reasons?

The use of color is superfluous. Each line is a "cohort" of people being tracked over time. Each cohort is given its own color or hue. But the color or hue does not signify much.

The dotted lines. This design element requires a footnote to explain. The reader learns that some of the numbers on the chart are projections because those numbers pertain to time well into the future. The chart was published in 2014, using historical data so any numbers dated 2014 or after (and even some data before 2014) will be projections. The data are in fact encoded in the dots, not the slopes. Look at the cohort that has one solid line segment and one dotted line segment - it's unclear which of those three data points are projections, and which are experienced.

The focus on within-cohort trends. The line segments indicate the desire of the designer to emphasize trends within each cohort. However, it's not clear what the underlying message is. It may be that more and more people are not getting married (i.e. fewer people are getting married). That trend affects each of the three age groups - and it's easier to paint that message by focusing on between-cohort trends.

***
Here is a chart that emphasizes the between-cohort trends. 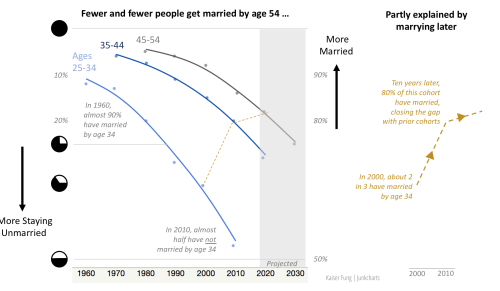 A key decision is to not mix oil and water. The within-cohort analysis is presented in its own chart, next to the between-cohort analysis. It turns out that some of the gap between cohorts can be explained by people deferring marriage to later in life. The steep line on the right indicates that a bigger proportion of people now gets married between 35 and 44 than in previous cohorts.