On the occasion of the hit movie Crazy Rich Asians, the New York Times did a very nice report on Asian immigration in the U.S.

The first two graphics will be of great interest to those who have attended my free dataviz seminar (coming to Lyon, France in October, by the way. Register here.), as it deals with a related issue.

The first chart shows an income gap widening between 1970 and 2016.

This uses a two-lines design in a small-multiples setting. The distance between the two lines is labeled the "income gap". The clear story here is that the income gap is widening over time across the board, but especially rapidly among Asians, and then followed by whites. 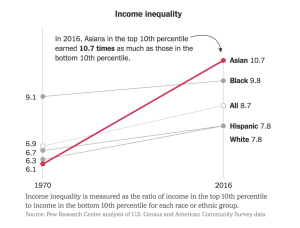 Asians are still a key story on this chart, as income inequality has ballooned from 6.1 to 10.7. That is where the similarity ends.

Notice how whites now appears at the bottom of the list while blacks shows up as the second "worse" in terms of income inequality. Even though the underlying data are the same, what can be seen in the Bumps chart is hidden in the two-lines design!

In short, the reason is that the scale of the two-lines design is such that the small numbers are squashed. The bottom 10 percent did see an increase in income over time but because those increases pale in comparison to the large incomes, they do not show up.

What else do not show up in the two-lines design? Notice that in 1970, the income ratio for blacks was 9.1, way above other racial groups.

Kudos to the NYT team to realize that the two-lines design provides an incomplete, potentially misleading picture.

The third chart in the series is a marvellous scatter plot (with one small snafu, which I'd get t0). 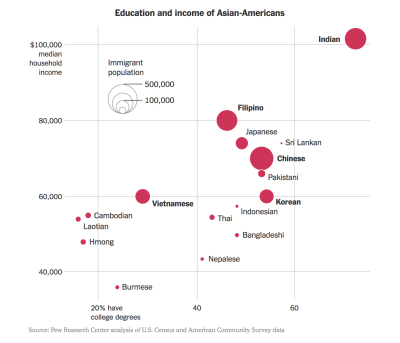 What are all the things one can learn from this chart?

Through careful design decisions, those points are clearly conveyed.

Here's the snafu. The designer forgot to say which year is being depicted. I suspect it is 2016.

Dating the data is very important here because of the following excerpt from the article:

This means that a key driver of the rapid increase in income inequality among Asian-Americans is the shift in composition of the ethnicities. More and more South Asian (most of whom are Indians) arrivals push up the education attainment and household income of the average Asian-American. Not only are Indians becoming more numerous, but they are also richer.

An alternative design is to show two bubbles per ethnicity (one for 1970, one for 2016). To reduce clutter, the smaller ethnicites can be aggregated into Other or South Asian Other. This chart may help explain the driver behind the jump in income inequality.

This kind of error states that the video link you are trying to play is no longer available or is not available in your country. Showbox APK Nov 2018 Cannot Play this Link, Server Down Error, or Video not available – try another server, and more then there is no 100% fix or resolution for this problem.