Environmental science can use better graphics

Mike A. pointed me to two animated maps made by Caltech researchers published in LiveScience (here).

The first map animation shows the rise and fall of water levels in a part of California over time. It's an impressive feat of stitching together satellite images. Click here to play the video. 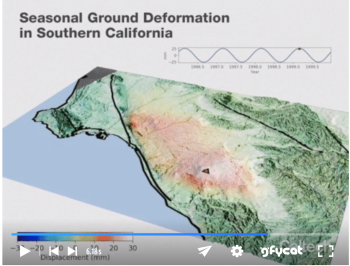 The animation grabs your attention. I'm not convinced by the right side of the color scale in which the white comes after the red. I'd want the white in the middle then the yellow and finally the red.

In order to understand this map and the other map in the article, the reader has to bring a lot of domain knowledge. This visualization isn't easy to decipher for a layperson.

Here I put the two animations side by side:

The area being depicted is the same. One map shows "ground deformation" while the other shows "subsidence". Are they the same? What's the connection between the two concepts (if any)?  On a further look, one notices that the time window for the two charts differ: the right map is clearly labeled 1995 to 2003 but there is no corresponding label on the left map. To find the time window of the left map, the reader must inspect the little graph on the top right (1996 to 2000).

The chart on the top right of the left map is a bit ugly. The year labels are given in decimals e.g. 1997.5. In R, this can be fixed by customizing the axis labels.

I also wonder how this curve is related to the map it accompanies. The curve looks like a model - perfect oscillations of a fixed period and amplitude. But one suppose the amount of fluctuation should vary by location, based on geographical features and human activities.

The author of the article points to both natural and human impacts on the ground level. Humans affect this by water usage and also by management policies dictated by law. It would be very helpful to have a map that sheds light on the causes of the movements.

The color scale with white after red mimics geography maps, where this looks quite natural (white being associated with mountain peak snow). It's a common color scale in environmental sciences. In R, it's available in terrain.colors().

"Maybe on average the ground level is collapsing?"
In the long term yes, and then it's called subsidence. I think that's what the second map displays.

"shouldn't the sinusoidal curve [in the first map] drift downward over time?"
Yes. And it shouldn't be that smooth in the first place, as you already pointed out.