Junk Charts
Welcome Twitter About Book Blog RSS
Environmental science can use better graphics
Big Macs in Switzerland are amazing, according to my friend

I very much enjoyed reading The Chronicle's article on "education deserts" in the U.S., defined as places where there are no public colleges within reach of potential students.

In particular, the data visualization deployed to illustrate the story is superb. For example, this map shows 1,500 colleges and their "catchment areas" defined as places within 60 minutes' drive. 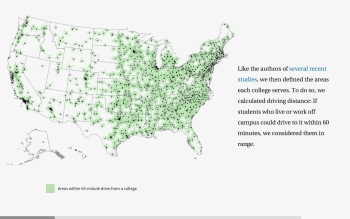 It does a great job walking through the logic of the analysis (even if the logic may not totally convince - more below). The areas not within reach of these 1,500 colleges are labeled "deserts". They then take Census data and look at the adult population in those deserts: This leads to an analysis of the racial composition of the people living in these "deserts". We now arrive at the only chart in the sequence that disappoints. It is a pair of pie charts: 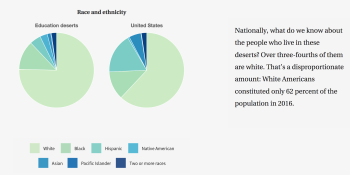 The color scheme makes it hard to pair up the pie slices. The focus of the chart should be on the over or under representation of races in education deserts relative to the U.S. average. The challenge of this dataset is the coexistence of one large number, and many small numbers.

Here is one solution: 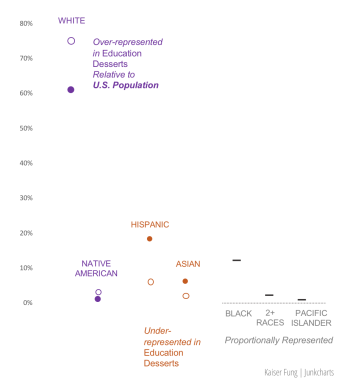 The Chronicle made a commendable effort to describe this social issue. But the analysis has a lot of built-in assumptions. Readers should look at the following list and see if you agree with the assumptions:

At the end of the piece, the author creates a "story time" moment. Story time is when you are served a bunch of data or analyses, and then when you are about to doze off, the analyst calls story time, and starts making conclusions that stray from the data just served!

Story time starts with the following sentence: "What would it take to make sure that distance doesn’t prevent students from obtaining a college degree? "

The analysis provided has nowhere shown that distance has prevented students from obtaining a college degree. We haven't seen anything that says that people living in the "education deserts" have fewer college degrees. We don't know that distance is the reason why people in those areas don't go to college (if true) - what about poverty? We don't know if 60 minutes is the hurdle that causes people not to go to college (if true).We know the number of adults living in those neighborhoods but not the number of potential students.

The data only showed two things: 1) which areas of the country are not within 60 minutes' driving of the subset of public colleges under consideration, 2) the number of adults living in those Census blocks.

So we have a case where the analysis is incomplete but the visualization of the analysis is superb. So in our Trifecta analysis, this chart poses a nice question and has nice graphics but the use of data can be improved. (Type QV)

The article from the Chronicle doesnt pass the sniff test. They have no colleges in their set located in the Pine Ridge Indian reservation in South Dakota. But a simple Google search shows at least 8 colleges on the reservation. I know they are 'real' schools because I worked at one for a summer. Many people on the reservation choose to stay on the reservation for their education, for many valid reasons. There is no reason to assume these people are underserved (by the measures they are talking about in the article).

They provide very little information on how they selected the schools they show. I believe they reduced the set of schools until they got the result they wanted. There is no reason to eliminate schools with acceptance rates lower than 30% unless you have already determined/assumed that the population you are looking at wouldn't get in to those schools. There is no evidence provided for how they came to that conclusion.

Correction: They do list Oglala Lakota College. But only one of the campuses, reducing the 'catchment' area of the college. How many other campuses did they leave off for other schools?

Gulf Coast State College is included in the IPEDS data base the article uses. It has an acceptance rate of 100%. But it is not listed in their map. Why?

It is in Panama City Beach Fl. There are 200k people in the metro area of that city (most within a 60 minute drive of the school). Thats a big swath of people to miscount.