Big Macs in Switzerland are amazing, according to my friend 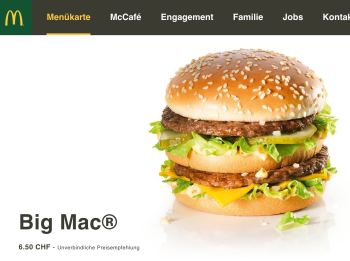 Note for those in or near Zurich: I'm giving a Keynote Speech tomorrow morning at the Swiss Statistics Meeting (link). Here is the abstract:

The best and the worst of data visualization share something in common: these graphics provoke emotions. In this talk, I connect the emotional response of readers of data graphics to the design choices made by their creators. Using a plethora of examples, collected over a dozen years of writing online dataviz criticism, I discuss how some design choices generate negative emotions such as confusion and disbelief while other choices elicit positive feelings including pleasure and eureka. Important design choices include how much data to show; which data to highlight, hide or smudge; what research question to address; whether to introduce imagery, or playfulness; and so on. Examples extend from graphics in print, to online interactive graphics, to visual experiences in society.

The Big Mac index seems to never want to go away. Here is the latest graphic from the Economist, saying what it says: 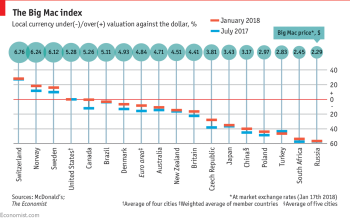 The index never made much sense to me. I'm in Switzerland, and everything here is expensive. My friend, who is a U.S. transplant, seems to have adopted McDonald's as his main eating-out venue. Online reviews indicate that the quality of the burger served in Switzerland is much better than the same thing in the States. So, part of the price differential can be explained by quality. The index also confounds several other issues, such as local inflation and exchange rate

Now, on to the data visualization, which is primarily an exercise in rolling one's eyeballs. In order to understand the red and blue line segments, our eyes have to hop over the price bubbles to the top of the page. Then, in order to understand the vertical axis labels, unconventionally placed on the right side, our eyes have to zoom over to the left of the page, and search for the line below the header of the graph. Next, if we want to know about a particular country, our eyes must turn sideways and scan from bottom up.

Here is a different take on the same data: 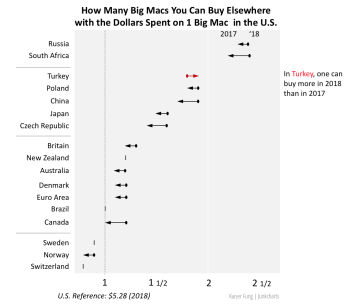 I transformed the data as I don't find it compelling to learn that Russian Big Macs are 60% less than American Big Macs. Instead, on my chart, the reader learns that the price paid for a U.S. Big Mac will buy him/her almost 2 and a half Big Macs in Russia.

The arrows pointing left indicate that in most countries, the values of their currencies are declining relative to the dollar from 2017 to 2018 (at least by the Big Mac Index point of view). The only exception is Turkey, where in 2018, one can buy more Big Macs equivalent to the price paid for one U.S. Big Mac. compared to 2017.

The decimal differences are immaterial so I have grouped the countries by half Big Macs.

This example demonstrates yet again, to make good data visualization, one has to describe an interesting question, make appropriate transformations of the data, and then choose the right visual form. I describe this framework as the Trifecta - a guide to it is here.

(P.S. I noticed that Bitly just decided unilaterally to deactivate my customized Bitly link that was configured years and years ago, when it switched design (?). So I had to re-create the custom link. I have never grasped  why "unreliability" is a feature of the offering by most Tech companies.)

I have two remarks on your graph. Although it is clearly better than the original one:

– I find the “2017 ’18” label confusing, as it is written with 2017 left to ’18, but is displayed above an arrow that goes in the other direction. I took me a while to understand that the tip of the arrow is ’18, and not 2017 as written above. I needed the note about Turkey on the right to figure out how to read them.

– I would have displayed a few more vertical lines to the graph. It is a bit hard to guess where are the ~five countries at the top as they are far from the axis labels, and I think it wouldn't saturate the graph to plot them.

Thank you very much anyway for all your impressive work on this blog.

The theory of the Big Mac index is that all Big Macs are the same, so if they're not the same, the theory fails.

But to complain that the index conflates things seems strange; that's the function of an index, and after all, you're often warning against data loss aversion.

derek: assuming all Big Macs are the same, how would you interpret the index?

reitrop: your 1st point is interesting. If I labeled the Turkey dots instead, the difficulty may not arise. on the 2nd point, it is a design choice :) I actually don't think half a burger or a tenth of a burger should be chewed over.