The following map accompanied an article in the Economist about China's drive to create a "digital silkroad," roughly defined as making a Silicon Valley. 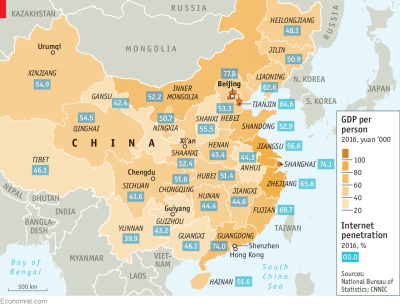 The two variables plotted are the wealth of each province (measured by GDP per capita) and the level of Internet penetration. The designer made the following choices:

If we apply the self-sufficiency test (i.e. by removing the printed data from the chart), it's immediately clear that the visual elements convey zero information about Internet penetration. This is a serious problem for a chart about the "digital silkroad"! 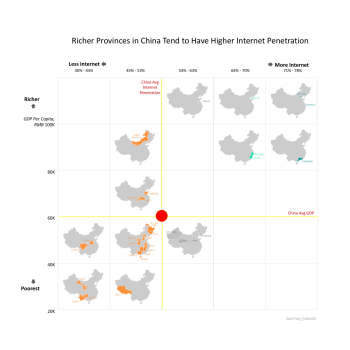 (Click on the image to see it in full.) Here is the top of the graphic:

The individual maps are not strictly necessary. Just placing provincial names onto the grid is enough, because regional pattern isn't salient here.

The Internet penetration data were grouped into five categories as well, putting it on equal footing as GDP per capita.