This map steals story-telling from the designer

Stolen drugs is a problem at federal VA hospitals according to the following map. 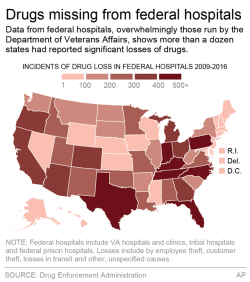 Let's evaluate this map from a Trifecta Checkup perspective.

VISUAL - Pass by a whisker. The chosen visual form of a map is standard for geographic data although the map snatches story-telling from our claws, just as people steal drugs from hospitals. Looking at the map, it's not clear what the message is. Is there one?

The 50 states plus DC are placed into five groups based on the reported number of incidents of theft. From the headline, it appears that the journalist conducted a Top 2 Box analysis, defining "significant" losses of drugs as 300 incidents or more. The visual design ignores this definition of "significance."

DATA - Fail. The map tells us where the VA hospitals are located. It doesn't tell us which states are most egregious in drug theft. To learn that, we need to compute a rate, based on the number of hospitals or patients or the amount of spending on drugs.

QUESTION - Fail. Drug theft from hospitals is an interesting topic but the graphic does not provide a good answer to the question.

Even if we don't have data to compute a rate, the chart is a bit better if proportions are emphasized, rather than counts. 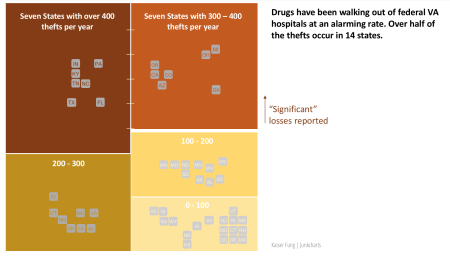 The proportions are most easily understood from the base of four quarters making the whole. The first group is just over a quarter; the second group is exactly a quarter. The third group plus the first group roughly make up a half. The fourth and fifth groups together almost fills out a quarter.

In the original map, we are told about at least 400 incidents of theft in Texas but given no context to interpret this statistic. What proportion of the total thefts occur in Texas?