Today, I take a detailed look at one of the pieces that came out of an amazing collaboration between Alberto Cairo, and Google's News Lab. The work on diversity in U.S. newsrooms is published here. Alberto's introduction to this piece is here.

One of the key strengths of the project is how the complex structure of the underlying data is displayed. The design incorporates the layering principle everywhere to clarify that structure.

At the top level, the gender and race data are presented separately through the two tabs on the top left corner. Additionally, newsrooms are classified into three tiers: brand-names (illustrated with logos), "top" newsrooms, and the rest. 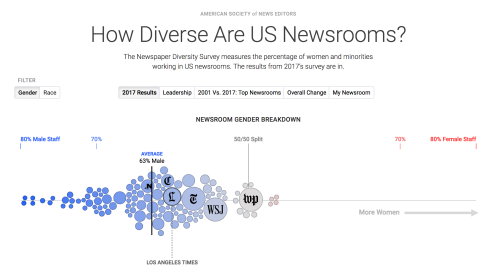 The brand-name newsrooms are shown with logos while the reader has to click on individual bubbles to see the other newsrooms. (Presumably, the size of the bubble is the size of each newsroom.)

I am not feeling this color choice. The key reference level on this chart is the 50/50 split (parity), which is given the pale gray. So the attention is drawn to the edges of the chart, to those newsrooms that are the most gender-biased. I'd rather highlight the middle, celebrating those organizations with the best gender balance.

The red-blue color scheme unfortunately re-appeared in a subsequent chart, with a different encoding. 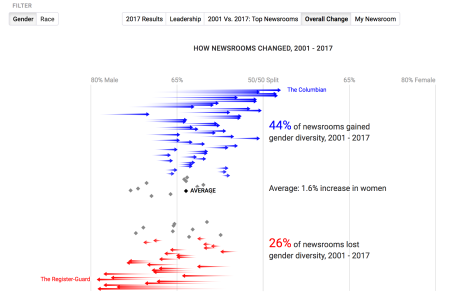 Now, blue means a move towards parity while red indicates a move away from parity between 2001 and 2017. Gray now denotes lack of change. The horizontal scale remains the same, which is why this can cause some confusion.

Despite the colors, I like the above chart. The arrows symbolize trends. The chart delivers an insight. On average, these newsrooms are roughly 60% male with negligible improvement over 16 years.

Back to layering. The following chart shows that "top" newsrooms include more than just the brand-name ones. 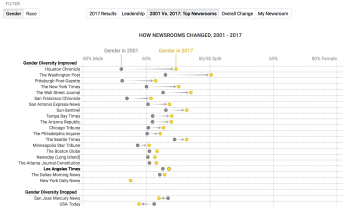 The dot plot is undervalued for showing simple trends like this. This is a good example of this use case.

While I typically recommend showing balanced axis for bipolar scale, this chart may be an exception. Moving to the right side is progress but the target sits in the middle; the goal isn't to get the dots to the far right so much of the right panel is wasted space.

Great technical analysis of Cairo's charts. I certainly agree with you on color for your initial reason but also for another; I briefly, at first glance, thought "red" meant conservative and "blue" meant liberal. These are loaded colors in our society and, in my opinion, when associated with something as potentially biased as news, could lead viewers to wrongly correlate political leanings with news agency. We have been using "red" and "blue" states for so long I think in a conversation about news I would have selected something not associated with political leanings.