Junk Charts
Welcome Twitter About Book Blog RSS
Saying no thanks to a box of donuts
Steel tariffs, and my new dataviz seminar

The tech world in which everyone is below average

Laura pointed me to an infographic about tech worker salaries in major tech hubs (link).

What's wrong with this map? 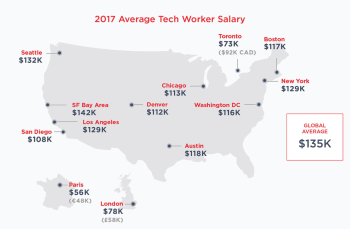 The box "Global average" is doubly false. It is not global, and it is not the average!

The only non-American cities included in this survey are Toronto, Paris and London.

The only city with average salary above the "Global average" is San Francisco Bay Area. Since the Bay Area does not outweigh all other cities combined in the number of tech workers, it is impossible to get an average of $135,000.

Here is the second chart.

What's wrong with these lines? 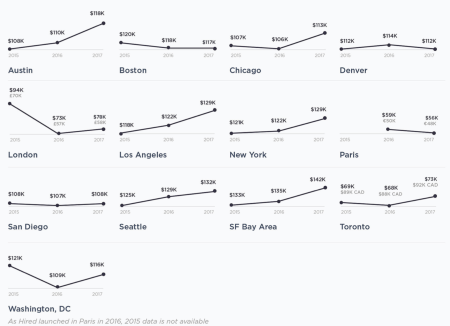 This chart frustrates the reader's expectations. The reader interprets it as a simple line chart, based on three strong hints:

Each line seems to show the trend of average tech worker salary, in dollar units.

However, that isn't the designer's intention. Let's zoom in on Chicago and Denver:

For a small-multiples setup, we expect all charts should use the same scale. Even though the data labels are absolute dollar amounts, the vertical axis is on a relative scale (percent change). To make things even more complicated, the percent change is computed relative to the minimum of the three annual values, no matter which year it occurs.

That's why $106,000 (Chicago) is at the same level as $112,000 (Denver). Those are the minimum values in the respective time series. As shown above, these line charts are easier to understand if the axis is displayed in its true units of percent change.

Here I index all lines to the earliest year. 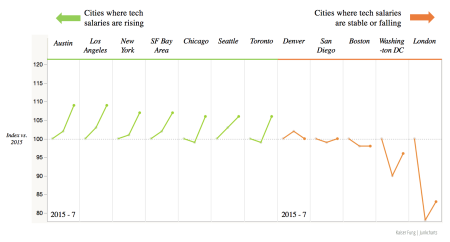 In a Trifecta Checkup analysis (link), I'd be suspicious of the data. Did tech salaries in London really drop by 15-20 percent in the last three years?

I suspect the reason for the drop in London salaries is due to currency conversion from Pounds to Dollars?
The Pound has dropped quite considerably over the time period 2015-2017.

IW: I like the conjecture. In this case, if you go back to their small-multiples chart, it prints the average salaries in pounds, which also shows a big drop from 2015 to 2016. It's probably the sample size and selection.