Saying no thanks to a box of donuts

As I reported last week, the Department of Education for Delaware is running a survey on dashboard design. The survey link is here.

One of the charts being evaluated is a box of donuts, as shown below:

I have written before about the problem with donut charts (see here). A box of donuts is worse than one donut. Here, each donut references a school year. The composition by race/ethnicity of the student body is depicted. In aggregate, the composition has not changed drastically although there are small changes from year to year.

In the following alternative, I use a side-by-side line charts, sometimes called slopegraphs, to illustrate the change by race/ethnicity. 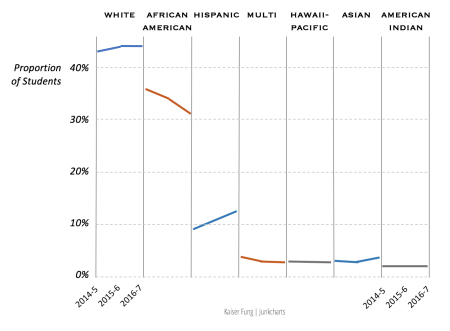 The key decisions are:

There is still a further question of how big a change from year to year is considered material.

This is a good example of why there is never "complete data." In theory, the numbers on this chart are "complete," and come from administrative records. Even when ignoring the possibility that some of the records are missing or incorrect, you still have the issue that the students in the system from year to year varies, so a 1 percent increase in the proportion of Hispanic students can indicate a real demographic trend, or it does not.