Looking above the waist, dataviz style

I came across this chart on NYU's twitter feed. 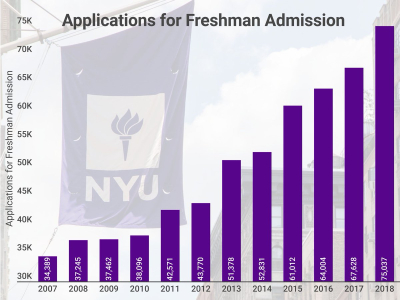 Growth has indeed been impressive; the dataviz less so. Here's the problem with not starting the vertical scale of a column chart at zero: 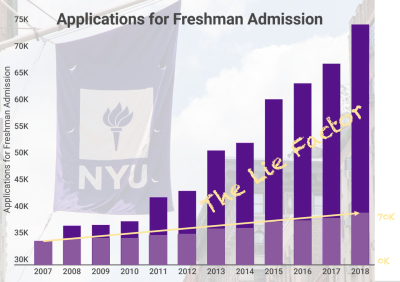 In a column chart, the heights of the columns should be proportional to the data. Here they are misaligned because an equal amount has been chopped off below 30,000 from all columns. The light purple that I layered on top of the chart presents the correct heights of the columns, assuming that the first column for 2007 indeed properly encoded the data.

The dark purple top of each column represents the "lie factor." It is the amount of exaggeration created by chopping off those legs. The lie factor is of Ed Tufte coinage.

The designer probably wanted to show the year-to-year trend more starkly. Doubling the number of applications in 10 years is pretty impressive. The solution is not to chop off the legs but to look above the waist. You can't fix the column chart but you can switch to a line chart, as follows: 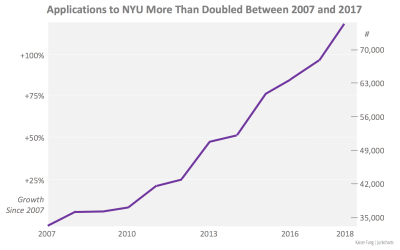 In a line chart, we are mostly concerned with the changing slope of the line segments going from year to year. The slopes encode the year-on-year growth rates.

Does switching to a line chart really let you off the hook in this case? A line may well highlight the changing slopes of the year-over-year growth rates, but the intent of the graphic is to call out the overall change in volume in applications. Even the headline in the remake focuses on this. Arguably the line is not an outright "lie" in the way that the columns are, but it seems like a better option would have been simply to fix the axis on the column chart.

Jeff: The "bank to 45 degrees" idea is relevant here. I don't think that is an iron-clad rule but it is an accepted convention. The column chart you like is just the same chart but less than 45 degrees.