Governor of Maine wants a raise

In a Trifecta checkup, this map scores low on the Q corner: what is its purpose? What have readers learned about the salaries of state governors after looking at the map? (Link to original) 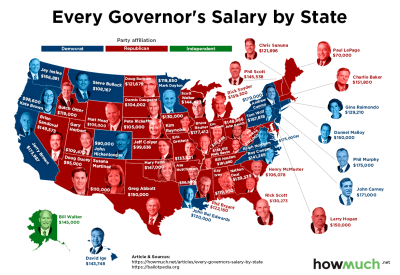 The most obvious "insights" include:

Notice I haven't said anything about salaries. That's because the reader has to read the data labels to learn the governor's salary in each state. It's work to know what the average or median salary is, or even the maximum and minimum without spending quality time with the labels.

This is also an example of a chart that is invariant to the data. The chart would look exactly the same if I substituted the real salaries with 50 fake numbers.

The following design attempts to say something about the data. The dataset is actually not that interesting because the salaries are relatively closely clustered. 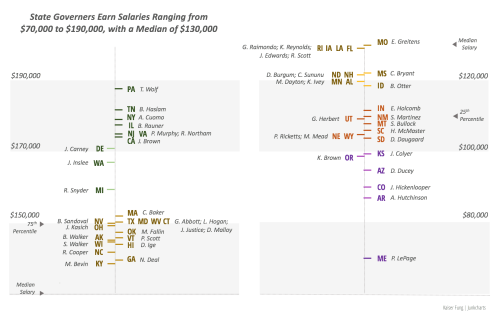 You get to see the full range of salaries, with the median, 25th and 75th percentiles marked off. The states are divided into top and bottom halves, with the median as the splitting level. A simple clustering algorithm is applied to group the salaries into similar categories, then color-coded.

The Maine governor is the least compensated.

If you have other ideas for this dataset, feel free to submit them to me.

It's not in the original data set, but indexing the governor's salary to the state mean could produce interesting results.

I don't know that I have any other thoughts about this data set (aside from a regular bar chart would be 1,000 times better than the map), because it seems like a pretty pointless data point for each governor without some kind of context.

I don't know what an appropriate indicator within a state to compare a governor's salary should be, but surely there is something that would make these numbers be more useful.

TTD: Standardizing the salary data doesn't really reveal much. Turns out that most are within 1SD and if I recall, at most one number is outside 2 SD.

I agree, that putting the data into comparison with something would make it more useful. e.g.
- population of the state (we should expect governors of bigger states to be paid more)
- state budget (is the governors salary roughly in line with what the state spends on other things)
- approval rating (who gets the most money for doing the worst job?)

And I think the original pairing with party is interesting too. But I wouldn't use the affiliation of the governor itself but the broader measure of how the state leans overall (e.g. average of last 6 statewide election results or something). So the question would be: Do Republican-leaning states pay their governors more or less than Democratic-leaning states?