Junk Charts
Welcome Twitter About Book Blog RSS
Light entertainment: this looks like a bar chart
A look at how the New York Times readers look at the others

I like the Guardian's feature (undated) on gun violence in American cities a lot.

The following graphic illustrates the situation in Baltimore.

The designer starts by placing where the gun homicides occured in 2015. Then, it leads readers through an exploration of the key factors that might be associated with the spatial distribution of those homicides.

The blue color measures poverty levels. There is a moderate correlation between high numbers of dots (homicides) and deeper blue (poorer). The magenta color measures education attainment and the orange color measures proportion of blacks. In Baltimore, it appears that race is substantially better at explaining the prevalence of homicides.

This work is exemplary because it transcends description (first map) and explores explanations for the spatial pattern. Because three factors are explored together in a small-multiples layout, readers learn that no single factor can explain everything. In addition, we learn that different factors have different degrees of explanatory power.

Attentive readers will also find that the three factors of poverty, education attainment and proportion black are mutually correlated.  Areas with large black populations also tend to be poorer and less educated.

I also like the introductory section in which a little dose of interactivity is used to sequentially present the four maps, now superimposed. It then becomes possible to comprehend the rest quickly. 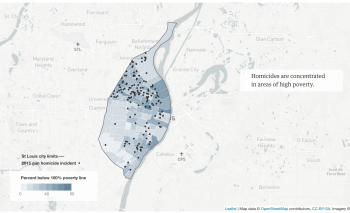 The top section is less successful as proportions are not easily conveyed via dot density maps. 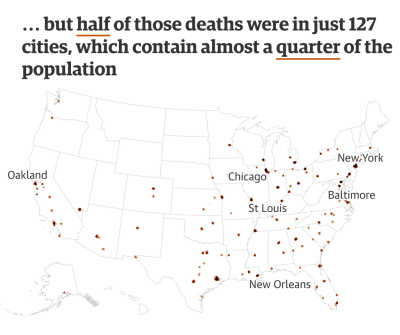 Dropping the map form helps. Here is a draft of what I have in mind. I just pulled some data from online sources at the metropolitan area (MSA) level, and it doesn't have as striking a comparison as the city-level data, it seems. 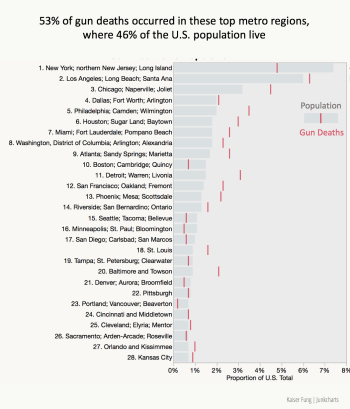 Excellent post! I frequently find mapped data has fundamental flaws - whether that be creating groups (not properly accounting for margin of errors) or just that mapping may not be the best way to represent the data.

Too often people jump the gun and immediately look to maps when data has some geographic aspect to it!