I’m not quite done with that Verge survey on social media popularity. Last time, I discussed one of the stacked bar charts about how much users like or dislike specific brands such as Facebook and Twitter. Today, I look at the very first chart in the article. 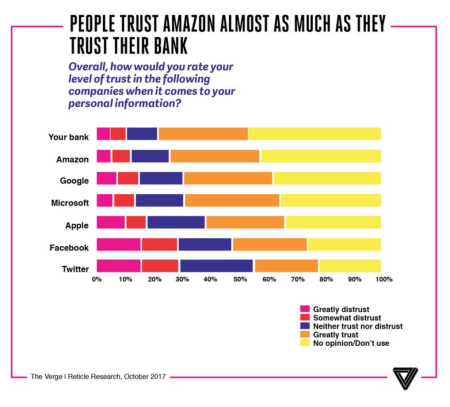 This chart supposedly says users trust Amazon the most among those technology brands, just about the same level as customers trust their bank.

The problems of this chart jump out if we place it side by side with the chart I discussed last time.

On the "trust" chart (left), the “no opinion/don’t use” category is painted yellow while on the right chart, it is colored gray. The yellow bars represent different things on each chart.

Also inconsistent is the order of the bars. Chart designers should be aware that readers develop certain expectations when going from one chart to the next.

The greatest mystery concerns the lengths of the yellow bars on the left side. I suspect that the brand labels have been wrongly applied. If we believe these labels, then almost 50% of users have “no opinion or don’t use” a bank. That seems highly unlikely. Further, the more popular services such as Amazon and Google apparently have almost double the proportion of users who have “no opinion or don’t use” versus Twitter.

I'd guess that the yellow actually stands for "greatly trust" and the "no opinion/Don't use" has been inadvertently dropped from the chart so part of the legend is incorrect.