Aleks J. wasn't amused by the graphs included in Verge's report about user attitudes toward the major Web brands such as Google, Facebook, and Twitter.

Let's use this one as an example: 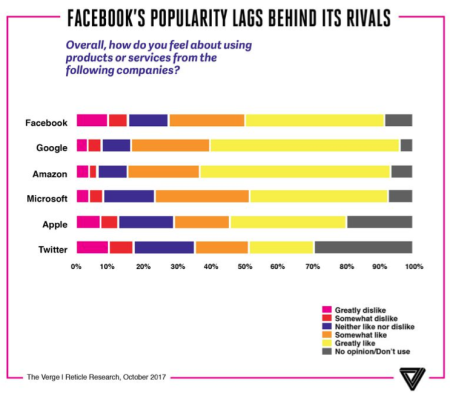 Survey respondents are asked to rate how much they like or dislike the products and services from each of six companies, on a five-point scale. There is a sixth category for "No opinion/Don't use."

In making this set of charts, the designer uses six different colors for the six categories. This means he/she thinks of these categories as discrete so that the difference between categories carries no meaning. In a bipolar, five-point scale, it is more common to pick two extreme colors and then use shades to indicate the degree of liking or disliking. The middle category can be shown in a neutral color to express the neutrality of opinion.

The color choice baffles me. The two most prominent colors, gray and dark blue, correspond to two minor categories (no opinion and neutral) while the most important category - "greatly like" - is painted the modest yellow, paling away.

Verge sees the popularity of Facebook as the key message, which explains its top position among the six brands. However, readers familar with the stacked bar chart form are likely looking to make sense of the order, and frustrated.

In revising this chart, I introduce a second level of grouping: the six categories fit into three color groups: red for dislike, gray for no opinion/neutral, and orange for like. The like and dislike groups are plotted at the left and right ends of the chart while the two less informative categories are lumped toward the middle. 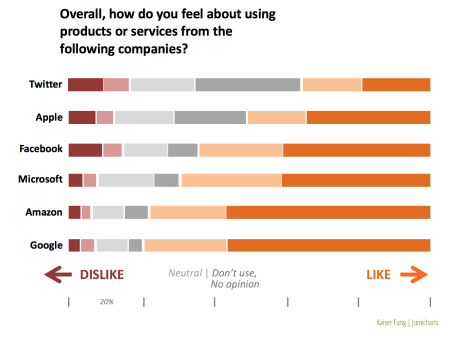 I take great pleasure in dumping the legend box.

Now, when a five-point scale is used, many analysts like to analyze the Top 2, or Bottom 2 boxes. The choice of colors in the above chart facilitates this analysis. Adding some subtle dots makes it even better! 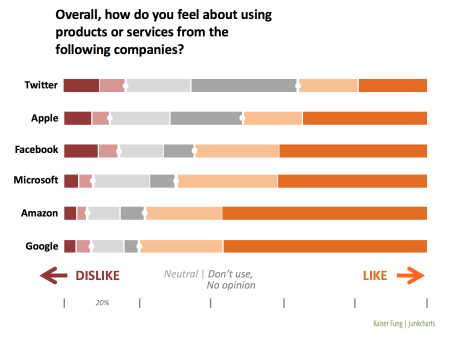 Because this chart is a superposition of a stacked bar chart and a dot plot, I am calling this a bardot chart.

Also notice that the brands are re-ordered by Top 2 box popularity.

I am no longer a fan of this type of diagram, but I was using it as well for some eye-catching posters.
I used color coding with darkest green indicating "like" and darkest red for "dislike" (and shades to indicate nuances in evaluation). Also, I extended the axes to have a center for a neutral evaluation.

Kaiser - your reformatting of the bars is clearly a superior way to show the data, and all of your points about why are helpful in understanding the issues involved.

I am struggling to find anything useful in the dot, however. I assume the goal is to draw more attention to the division between neutral and non-neutral; I think the color choice alone should do that adequately.

And if the color choice alone is not enough, I would prefer to then look at alternate displays, such as small multiples for positive/negative/neutral, or something similar. If something more subtle than small multiples were needed, but more salient than just the colors, I would consider instead, removing the white border between the series, *except* for the white border between negative/neutral, and neutral/positive - I feel this would achieve what you're aiming for without introducing [what comes across to me as] a foreign and disruptive shape.