The visual should be easier to read than your data

A reader sent this tip in some time ago and I lost track of who he/she is. This graphic looks deceptively complex. 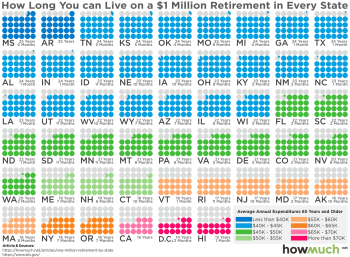 What's complex is not the underlying analysis. The design is complex and so the decoding is complex.

The question of the graphic is a central concern of anyone who's retired: how long will one's savings last? There are two related metrics to describe the durability of the stash, and they are both present on this chart. The designer first presumes that one has saved $1 million for retirement. Then he/she computes how many years the savings will last. That, of course, depends on the cost of living, which naively can be expressed as a projected annual expenditure. The designer allows the cost of living to vary by state, which is the main source of variability in the computations. The time-based and dollar-based metrics are directly linked to one another via a formula.

The design encodes the time metric in a grid of dots, and the dollar-metric in the color of the dots. The expenditures are divided into eight segments, given eight colors from deep blue to deep pink.

Thirteen of those dots are invariable, appearing in every state. Readers are drawn into a ranking of the states, which is nothing but a ranking of costs of living. (We don't know, but presume, that the cost of living computation is appropriate for retirees, and not averaged.) This order obscures any spatial correlation. There are a few production errors in the first row in which the year and month numbers are misstated slightly; the numbers should be monotonically decreasing. In terms of years and months, the difference between many states is immaterial. The pictogram format is more popular than it deserves: only highly motivated readers will count individual dots. If readers are merely reading the printed text, which contains all the data encoded in the dots, then the graphic has failed the self-sufficiency principle - the visual elements are not doing any work.

In my version, I surface the spatial correlation using maps. The states are classified into sensible groups that allow a story to be told around the analysis. Three groups of states are identified and separately portrayed. The finer variations between states within each state group appear as shades. 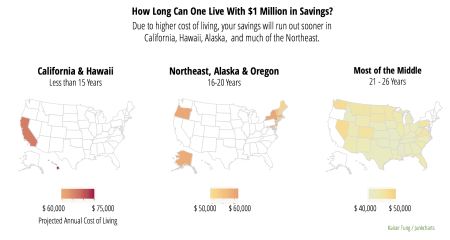 Ray Vella (link) asked me to comment on a chart about regional wealth distribution, which I wrote about here. He also asked students in his NYU infographics class to create their own versions.

This effort caught my eye: 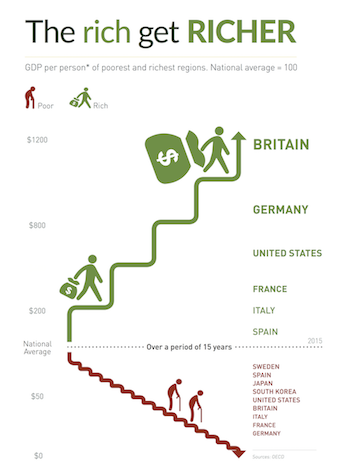 This work is creative, and I like the concept of using two staircases to illustrate the diverging fortunes of the two groups. This is worlds away from the original Economist chart.

Is it possible to salvage the concept? I tried. Here is an idea: 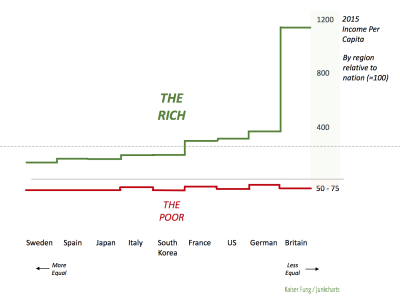 I abandoned the time axis so the data plotted are only for 2015, and the countries are shown horizontally from most to least equal. I'm sure there are ways to do it even better.

Infographics can be done while respecting the data. Ray is one of the designers who appreciate this. And thanks Ray for letting me blog about this. 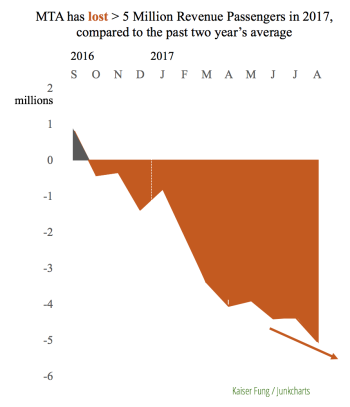 Upcoming talks here and there

Then next Monday (Nov 13, 11 am), I will be in Boston at Harvard Business Review, giving a "live whiteboard session" on A/B Testing. This talk will be streamed live on Facebook Live.

Finally, my letter to the editor of New York Times Magazine was published this past Sunday. This letter is a response to Susan Dominus's article about the "power pose" research, and the replication crisis in social science. Fundamentally, it is a debate over how data is used and analyzed in experiments, and therefore relevant to my readers. I added a list of resources in this blog post about the letter.

Those are some of my favorite topics: dataviz, A/B testing, and data-driven decision-making.