Junk Charts
Welcome Twitter About Book Blog RSS
Let's not mix these polarized voters as the medians run away from one another
Three pies and a bar: serving visual goodness

In the last post, I discussed one of the charts in the very nice Washington Post feature, delving into polarizing American voters. See the post here. (Thanks again Daniel L.)

Today's post is inspired by the following chart (I am  showing only the top of it - click here to see the entire chart): 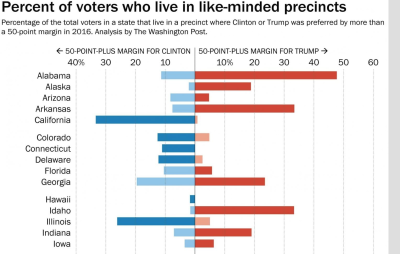 The chart plots each state as a separate row, so like most such charts, it is tall. The data analysis behind the chart is fascinating and unusual, although I find the chart harder to grasp than expected. The analyst starts with precinct-level data, and determines which precincts were "lop-sided," defined as having a winning margin of over 50 percent for the winner (either Trump or Clinton). The analyst then sums the voters in those lop-sided precincts, and expresses this as a percent of all voters in the state.

This is more sophisticated than the usual analysis that shows up in journalism.

The bar chart may confuse readers for several reasons:

The bars are facing out from the middle, which is the 0% line. This arrangement is most often used in a population pyramid, and used when the designer feels it important to let readers compare the magnitudes of two segments of a population. I do not feel that the Democrat versus Republican comparison within each state is crucial to this chart, given that most states were not competitive.

What is more interesting to me is the total proportion of voters who live in these lop-sided precincts. The designer agrees on this point, and employs bar stacking to make this point. This yields some amazing insights here: several Democratic strongholds such as Massachusetts surprisingly have few lop-sided precincts.

***
Here then is a remake of the chart according to my priorities. Click here for the full chart. 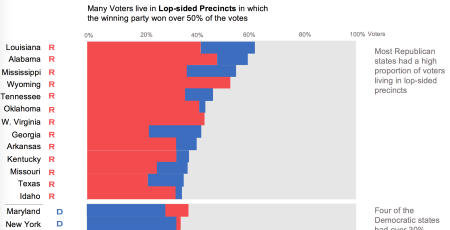 The emphasis is on the total proportion of voters in lop-sided precincts. The states are ordered by that metric from most lop-sided to least. This draws out an unexpected insight: most red states have a relatively high proportion of votesr in lop-sided precincts (~ 30 to 40%) while most blue states - except for the quartet of Maryland, New York, California and Illinois - do not exhibit such demographic concentration.

The gray/grey area offers a counterpoint, that most voters do not live in lop-sided districts.

P.S. I should add that this is one of those chart designs that frustrate standard - I mean, point-and-click - charting software because I am placing the longest bar segments on the left, regardless of color.

Ya know I totally overlooked this chart on my first read through.

Now that you point it out I wonder if the bar chart is even the right medium for the point the creator was trying to make. Although I think your take is much clearer especially because it takes the winner value and explicitly states using the letter on the axis rather than trying to awkwardly encode it in the border of the bar.