Junk Charts
Welcome Twitter About Book Blog RSS
Excel is the graveyard of charts, no!
Lop-sided precincts, a visual exploration

Long-time follower Daniel L. sent in a gem, by the Washington Post. This is a multi-part story about the polarization of American voters, nicely laid out, with superior analyses and some interesting graphics. Click here to see the entire article.

Today's post focuses on the first graphic. This one: 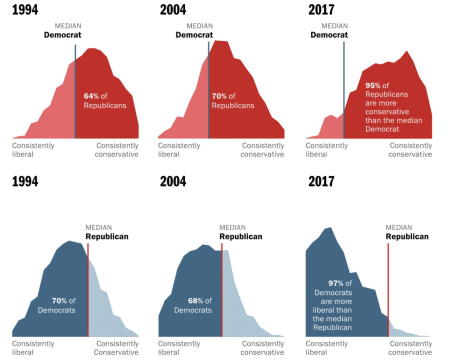 This is a nice statistical way of laying out the polarization. There are a number of additional insights one can draw from the population distributions: for example, in the bottom row, the Democrats have been moving left consistently, and decisively in 2017. By contrast, Republicans moved decisively to the right from 2004 to 2017. I recall reading about polarization in past elections but it is really shocking to see the extreme in 2017.

A really astounding but hidden feature is that the median Democrat and the median Republican were not too far apart in 1994 and 2004 but the gap exploded in 2017.

I like to solve a few minor problems on this graphic. It's a bit confusing to have each chart display information on both Republican and Democratic distributions. The reader has to understand that in the top row, the red area represents Republican voters but the blue line shows the median Democrat.

Also, I want to surface two key insights: the huge divide that developed in 2017, and the exploding gap between the two medians.

Here is the revised graphic: 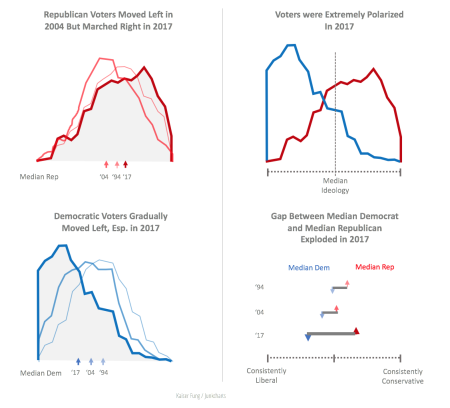 On the left side, each chart focuses on one party, and the trend over the three elections. The reader can cross charts to discover that the median voter in one party is more extreme than essentially all of the voters of the other party. This same conclusion can be drawn from the exploding gap between the median voters in either party, which is explicitly plotted in the lower right chart. The top right chart is a pretty visualization of how polarized the country was in the 2017 election.

It also shows that the scales need to be redone, if both parties are hitting the max so hard, i.e., the bell shapes are gone and there are just sharp drop offs.