The visual story published by the New York Times on hurricane Irma is a masterpiece. See the presentation here.

The story starts with the standard presentation of the trajectories of past hurricane on a map: 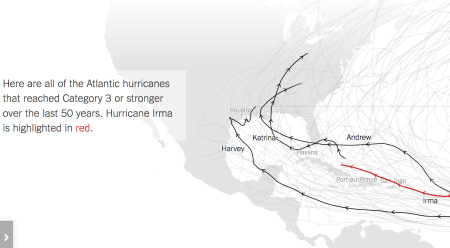 Maps are great at conveying location and direction but much is lost in this rendering - wind speeds, time, strength, energy, to name but a few.

The Times then switches to other chart forms to convey some of the other data. A line chart is used to convey the strength of wind speeds as the storms shake through the Atlantic. Some kind of approximation is used to straighten the trajectories along an east-west orientation. 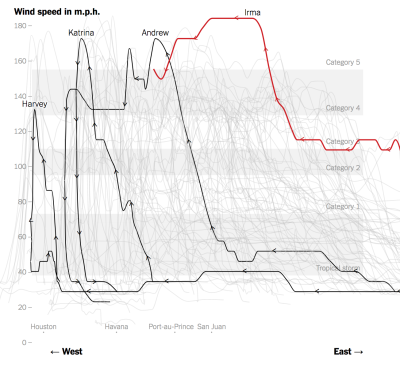 The key insight here is how strong Irma was pretty far out in the Atlantic. The lines in the background can be brought to live by clicking on them. This view omits some details - the passage of time is ignored, and location has been reduced to one dimension.

The display then switches again, and this time it shows time and wind speed. 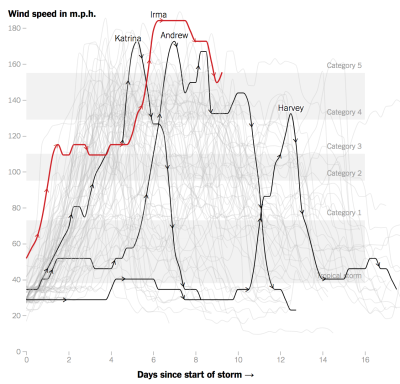 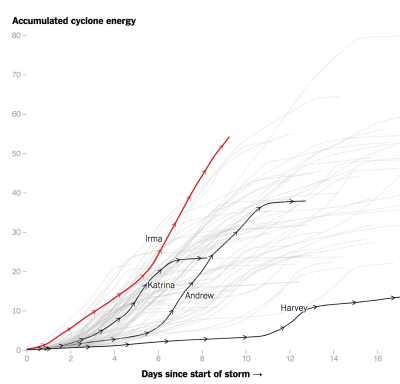 This chart also ignores location. It does show Irma as a special storm. The storm that has reached the maximum energy by far is Ivan. Will Irma beat that standard? I am not so sure.

Each chart form has limitations. The use of multiple charts helps convey a story from multiple perspectives. A very nice example indeed.