Getting into the head of the chart designer 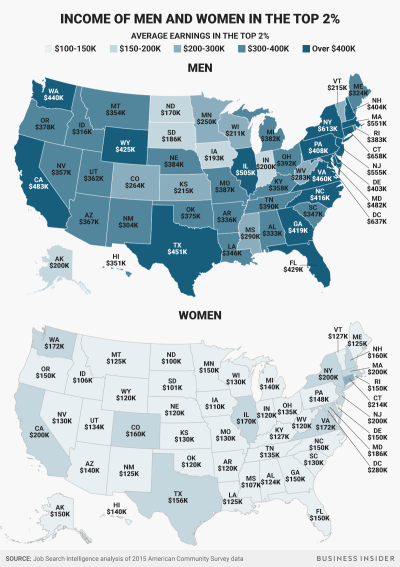 The chart shows average salaries in the top 2 percent of income earners. The data are split by gender and by state.

First, I notice that the designer chooses to use the map form. This decision suggests that the spatial pattern of top incomes is of top interest to the designer because she/he is willing to accept the map's constraints - namely, the designer loses control of the x and y dimensions, as well as the area and shape of the data containers. For the U.S. state map, there is no elegant solution to the large number of small states problem in the Northeast.

Second, I notice the color choice. The designer provides actual values on the visualization but also groups all state-average incomes into five categories. It's not clear how she/he determines the boundaries of these income brackets. There are many more dark blue states than there are light blue states in the map for men. Because women incomes are everywhere lower than men, the map at the bottom fits all states into two large buckets, plus Connecticut. Women incomes are lower than men but there is no need to break the data down by gender to convey this message.

Third, the use of two maps indicates that the designer does not care much about gender comparisons within each state. These comparisons are difficult to accomplish on the chart - one must involuntarily bob one's head up and down to make the comparisons. The head bobbing isn't even enough: then you must pull out your calculator and compute the ratio of women to men average. If the designer wants to highlight state-level comparisons, she/he could have plotted the gender ratio on a single map, like this: 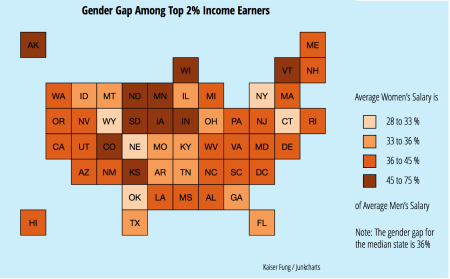 (a) is better conveyed in more aggregate form. Goal (b) is defeated by the lack of clear clustering. (c) is not helped by the top-bottom split.

In making the above chart, I discover a pattern - that women fare better in the smaller states like Montana, Iowa, North & South Dakota. Meanwhile, the disparity in New York is of the same degree as Oklahoma and Wyoming. 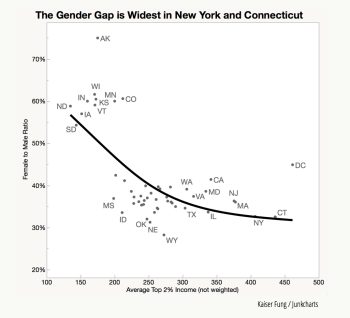 This chart tells readers a bit more about the underlying data, without having to print the entire dataset on the page.